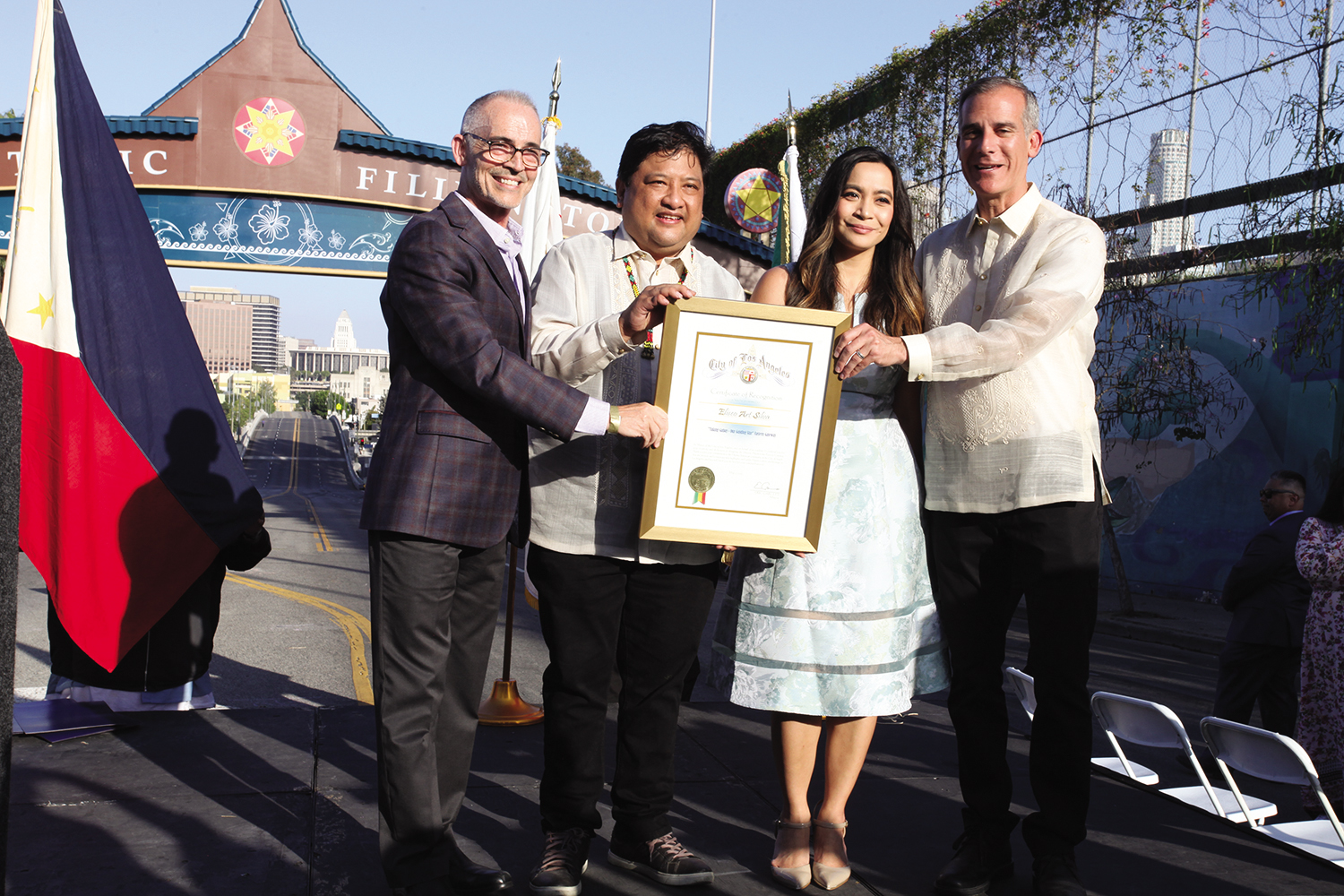 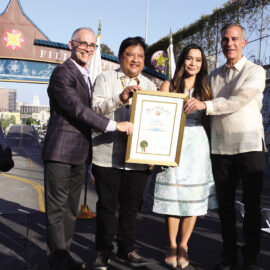 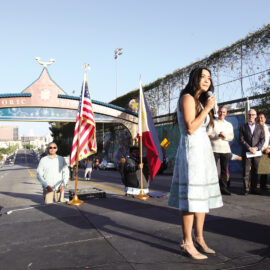 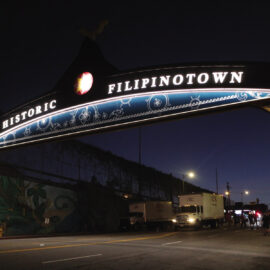 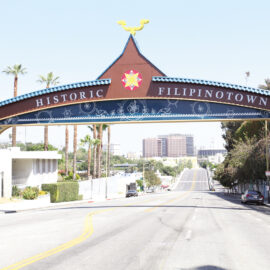 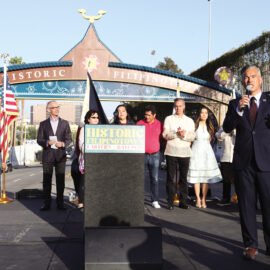 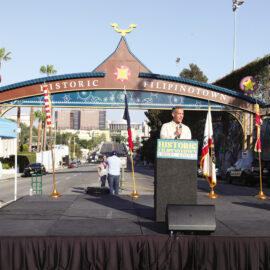 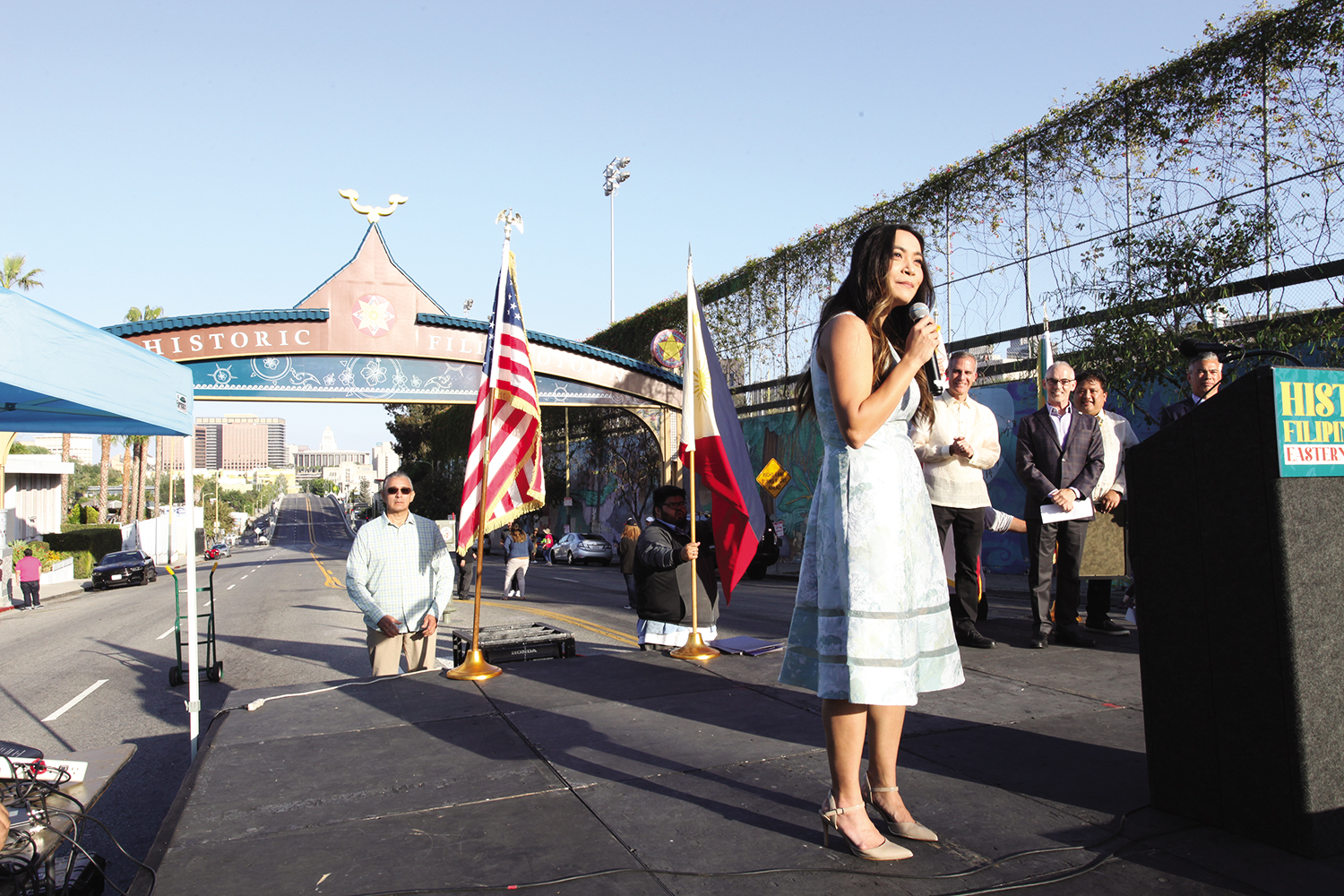 The gateway project was prioritized by LA’s Department of Public Works, led by Commissioner Emeritus Jessica Caloza, with management and oversight provided by the Bureau of Engineering. 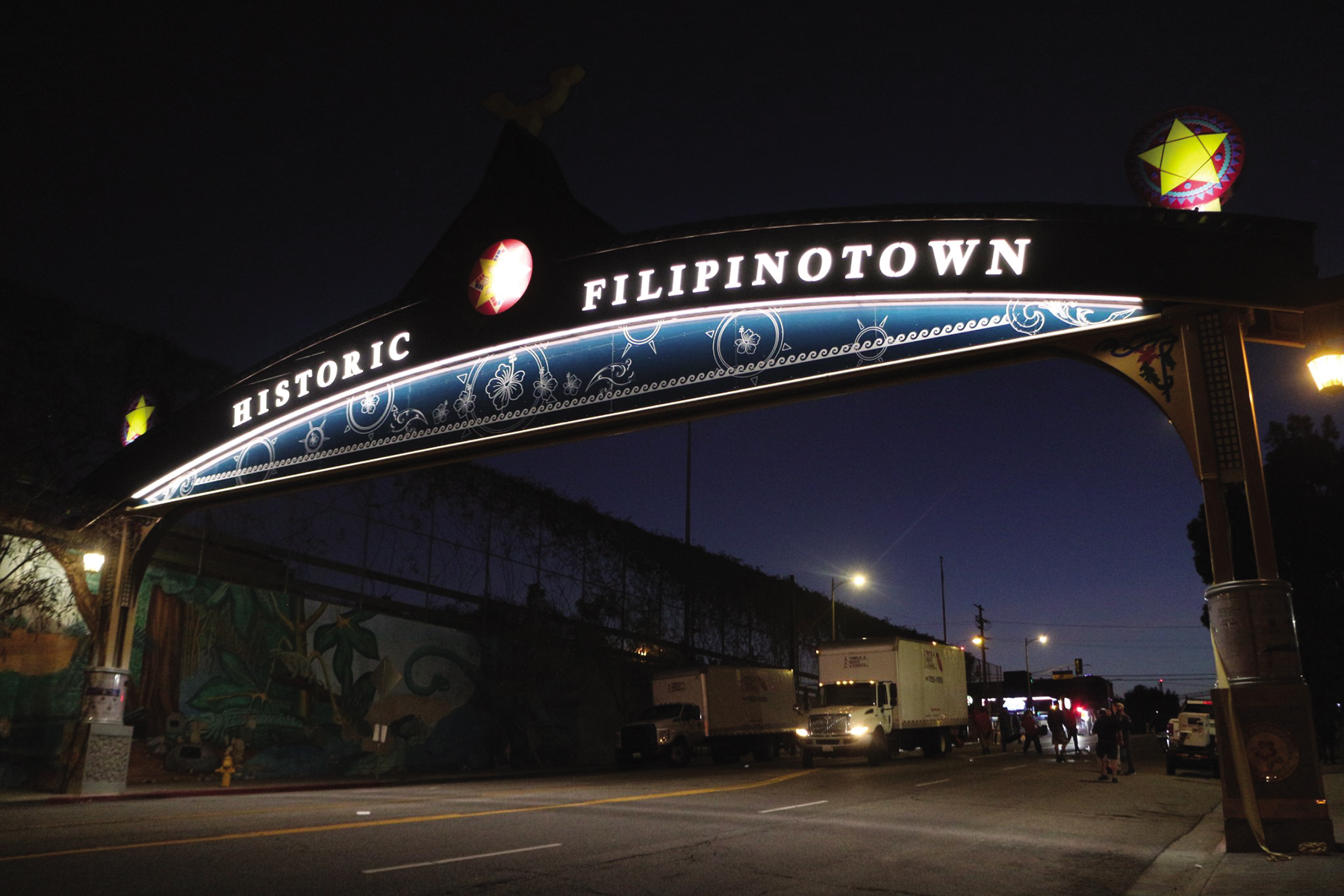 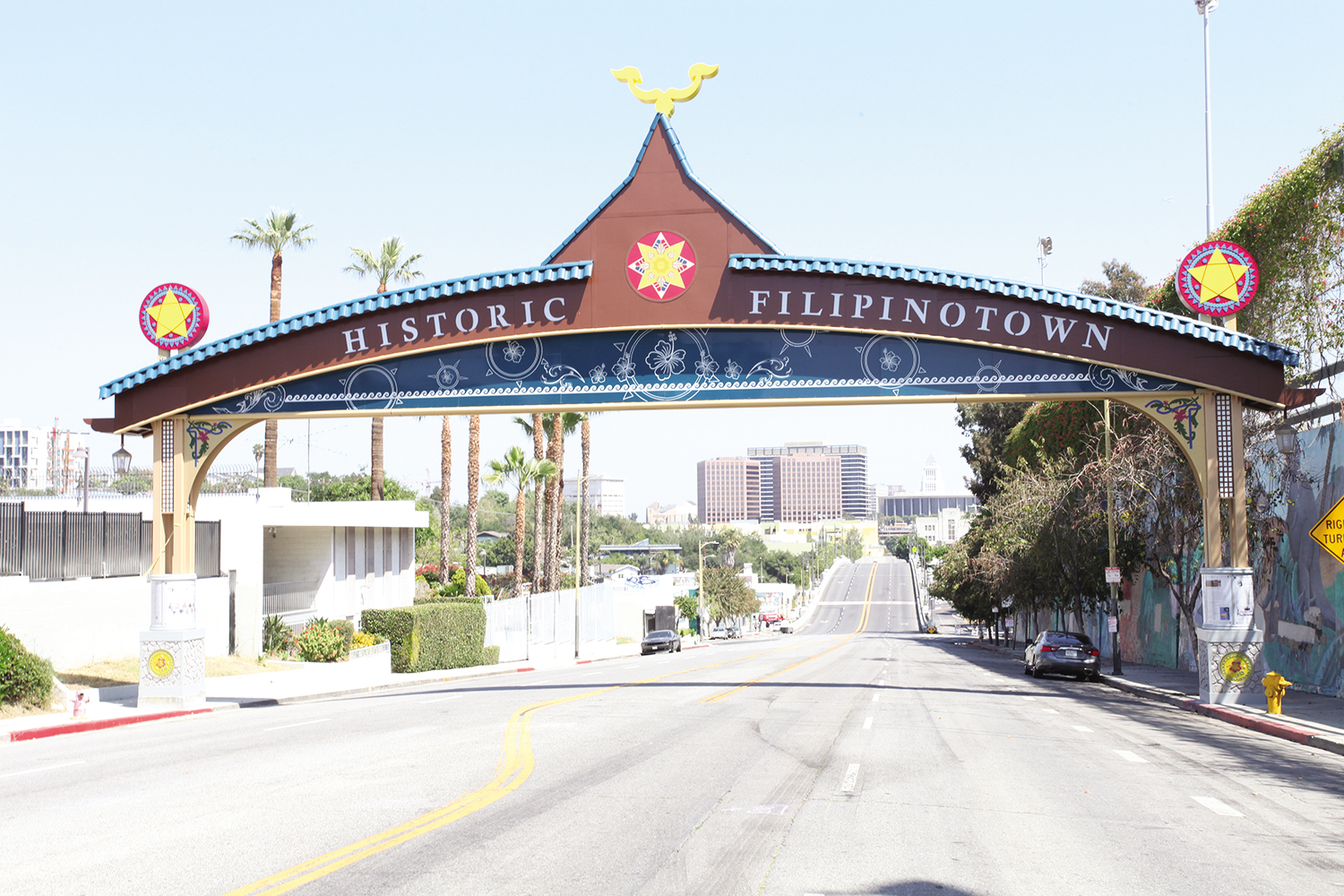 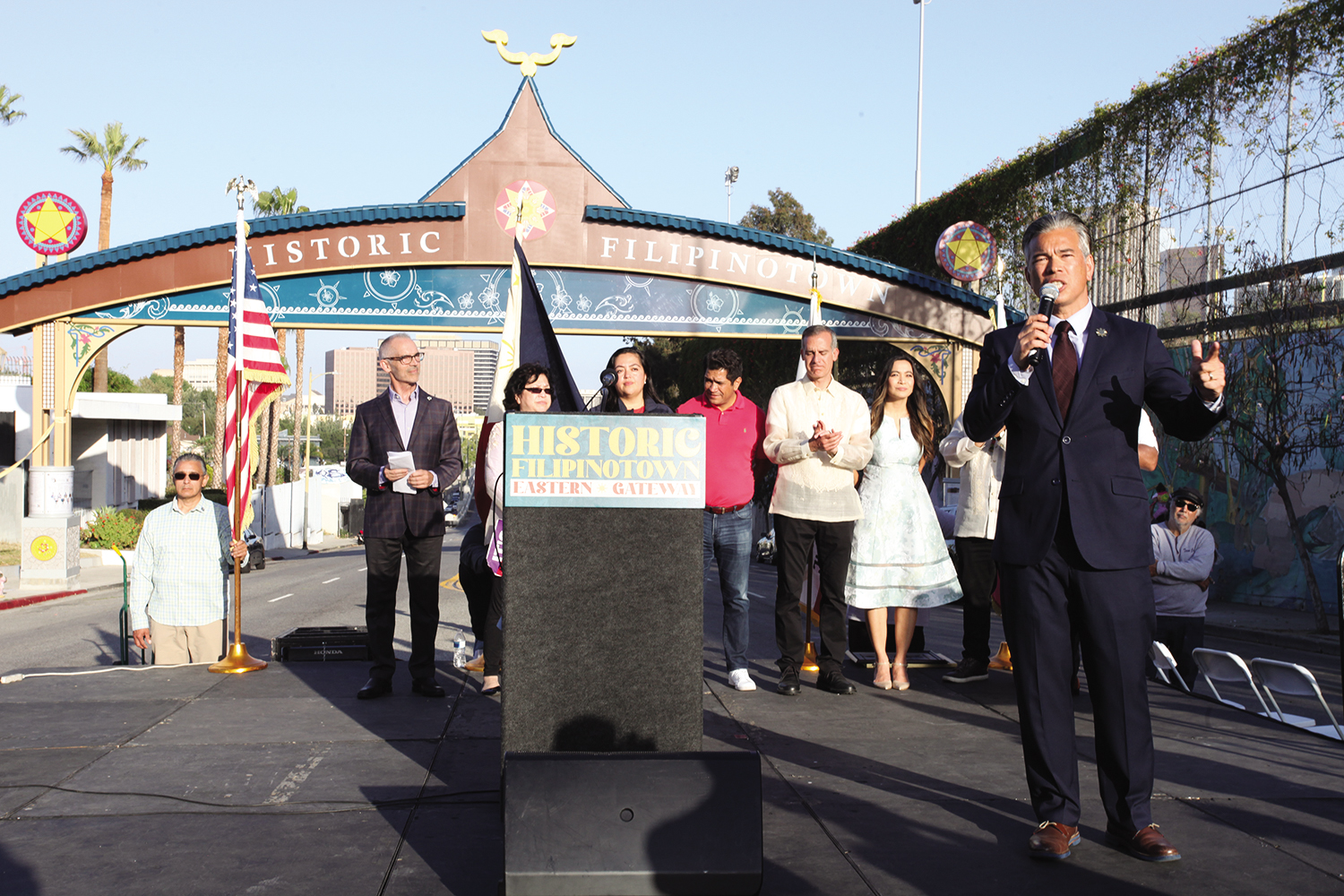 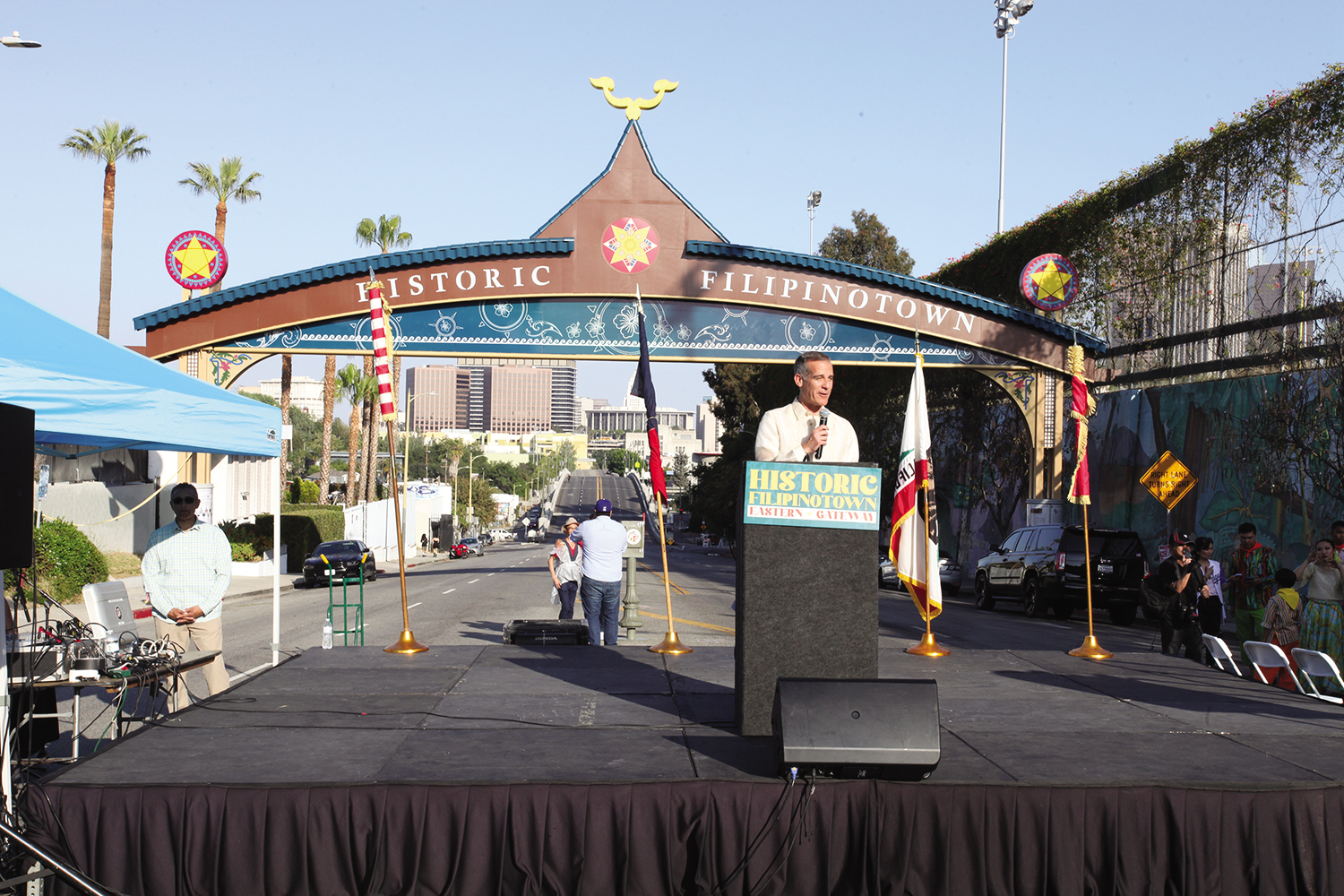 Donning a barong, LA Mayor Eric Garcetti attended the gateway celebration, sharing the creation of Historic Filipinotown when he was a city councilmember. | AJPress photo by Andy Tecson

LOS ANGELES — After nearly two decades, the Historic Filipinotown Eastern Gateway, located at the heart of Los Angeles and the largest of its kind in the United States, was officially unveiled in a community ceremony on Saturday, May 7.

The arch, which costs about $587,000 is 30 feet high and spans about 82 feet across the width of Beverly Boulevard at the eastern entrance into Historic Filipinotown.

The project was prioritized by the city’s Department of Public Works, led by Commissioner Emeritus Jessica Caloza, with management and oversight provided by the Bureau of Engineering.

The gateway is the culmination of two decades of planning and organization by the Historic Filipinotown community.

Then-councilmember Eric Garcetti commissioned a study in March 2003 on potential improvements to the neighborhood. Current councilmember Mitch O’Farrell’s office identified funding for the gateway and engaged the community in the design process. Renderings were released in June 2020, and construction began in March 2021.

Silva, in an interview with the Asian Journal, said the monument is predominantly inspired by his belief that art, which comes from God, is ought to be shared to all mankind.

“My goal is to come up with a link for Filipino art, which I believe has God’s presence in it. It should be known to the world and be appreciated,” Silva said.

Silva said the precolonial houses of nobility known as “Maginoo House” is the main vernacular Philippine Architecture used as a basis for the gateway.

But he said the design idea of putting a human face in the sun located at the center of the arch is what makes it a standout.

“This is what we want to do here, we are ‘filipinizing’ the Filipinotown and what that all means is putting a Filipino face to Filipinos in America,” he said.

The title of the iconic landmark, Silva said, was also culled directly from the name of the Rizal Monument (Motto Stella: Guiding Star) at the Luneta Park in Manila.

“Philippines’ national hero Jose Rizal is indeed ‘The True North’ or the Guiding Star of all Filipinos wherever they may be. Rizal is subtly represented by the Philippine Sun with a ‘human face’ (the centerpiece Parol) which was the design of the flag of the first Republic of the Philippines which eulogized Rizal in the June 12,1898 Declaration of Independence for having foretold, guided and inspired the independence and filipinization movement of the Philippines, humanizing and reclaiming for all Filipinos their humanity and identity,” he said.

Silva’s design was also reflective of the Filipino ancestor’s ship-building traditions. “The ‘Talang Gabay’ of our seafaring ancestors are: The North Star at night, and the ‘direction of the flight of birds,’ symbolized by stylized ‘Sarimanok’ motifs installed as roof adornments in our ancestors’ homes. Some boats and ships of our ancients installed bird accessories as well,” he said.

Aside from boats and houses, the arch’s shape is also inspired by salakot, a famous headgear in the Philippines, which symbolizes friendship among different races, among natives and immigrants. “Symbolically, the monument can be viewed as two hands raising up a giant salakot, with both the pillars a virtual stand-in for arms and the corner braces as hands holding up the salakot-shaped arch,” he said.

Other features of the arch are the gumamela flower, along with the intricate flora and vine work, painted within the corner braces which were culled from 18th century Philippines; and the capiz windows integral to bahay na bato house, both connected by a central panel that upholds a bamboo teal roof. The purpose of the design is to give visitors entering the HiFi neighborhood a homely reception as if they are being welcomed with warm hospitality in a traditional Filipino house, Silva said.

Another symbolism in the infamous gateway is the references to the native Filipino lanterns or parols, which are hung during Christmas season in front of the windows of houses to symbolize a Filipino family’s hospitality. The parol is also a Filipino symbol of the Star of Bethlehem to send a message that the Holy family is welcome to their home.

“Thus the three lanterns installed and lighted on the arch extends a warm welcome to everyone who visits the HiFi,” Silva said.

During the official dedication of the gateway, some key local government officials, Filipino American community leaders and celebrities shared their respective views and visions for the landmark’s installation.

In his speech, Los Angeles Mayor Eric Garcetti encouraged the Fil-Am community and all other races to be inspired by what really this monument stands for.

“As long as the community is unified, it (the project) will get done. This is important for us, for us all, to own this, not to designate a neighborhood, this is not just for Filipinos but for all non-Filipinos to embrace Filipino culture and history and recognize it as well,” Garcetti said.

The city leader also called for the community to be pro-active and be vigilant in facing all the challenges of today’s world.

“We, not only marked history, we are committed to making history, and this is my challenge to you. What will you do next, what new business will you open and celebrate Filipino food, what organization will you donate to, what ways you will do to help us solve the housing crisis, what will you do to help raise our wages, and how will you recognize the essential workers that helped so many of us survive the COVID” Garcetti said.

Joselyn Geaga-Rosenthal, LA Building and Safety commissioner and long-time HiFi resident, in her speech, echoed Garcetti’s call for greater cooperation among all the communities in the area.

“The gateway will be an invitation to all of us to give every little bit of your life. Let’s help to support our future projects. This project did not happen as an an accident. It’s part of history. We are making history for our future generations,” Rosenthal said.

For his part, Councilmember Mitch O’Farrell, who represents Historic Filipinotown and who is instrumental in making funds available for the project, said this arch was a “labor of love.”

“This project is a multi-year of labor of love. It was first identified in a master plan 20 years ago. When you do a master plan you identify goals, one goal was an eastern gateway and a western gateway. All these years later, since I was able to identify the funding, working with the artist and the community, look at the vision that they came up with, we’ve been able to facilitate this. I’m honored to represent this community in the city council and we’re gonna do greater things,” O’ Farrell said.

“This community is so deserving of such an iconic, impressive landmark. The Historic Filipinotown Eastern Gateway pays fitting tribute to the incredible contributions of the Filipino community in Los Angeles and beyond,” the councilmember said.

Caloza, the first Filipina who served as a Board of Public Works commissioner, lauded O’Farrell’s utmost dedication to the project.

“Councilmember Mitch O’ Farrell has been an incredible champion of the Filipino community and helped paved the way to get this built and I helped him as a public works commissioner to put this together. This is the largest Filipino monument, not just in LA, not just in California, but the entire country. And we did it with the leadership and support of the community. We make sure that we empower communities. This is what representation means,” the former public works commissioner said.

California’s first Filipino American Attorney General Rob Bonta, for his part, said that this gateway commemorates the Filipinos’ triumphant struggle to make a difference and be recognized in this part of the world.

“I am so proud as we cement our mark on the story of America and the story of California. This monument is a symbol of an incredible contribution that we made to building this state, this nation. This is also a recognition of our beautiful story that has been a part of the fabric of the American story,” he said.

“It has been our Californian dream, our American dream, our immigrant story to come in this country definitely seeking opportunity for ourselves and for our family and also to make a difference and this gateway here in Historic Filipinotown recognizes that we have made a difference, year after year, generation after generation,” Bonta added.

Bonta recalled a significant sign of struggle of Filipino immigrants in the United States more than a century ago.

“One of the things that has motivated me and inspired me is a photograph that I keep in my office that shows in a hotel lobby in Stockton in 1920s which says, ‘Positively No Filipinos Allowed.’ It reminds of me of the hate that we faced, the pain, the struggles that we overcame. And today, it feels different. A hundred years later, this archway is saying not just the Filipinos are allowed, but we belong,” the attorney-general, whose family originated from the province of Dumaguete, said.

Search to Involve Pilipino Americans (SIPA) executive director Kimmy Maniquis, meanwhile, said this is really a “big deal” for the Filipino community, not just in LA but for all the Filipinos.

“Having artistic pieces like this grand and this public, to celebrate our history is really meaningful and this is just so beautiful. I can’t express how beautiful it is. I am excited that the community comes together today to celebrate this. It’s a big deal,” Maniquis said.

Coinciding the grand launch of the Eastern Gateway, SIPA is celebrating its 50th anniversary this year. The newly constructed SIPA community center on Temple Street is slated to be opened later this year.

Fil-Am actress Tia Carrere, who sang the U.S. National Anthem during the event, said this is a huge accomplishment for all Filipinos, especially those who came to the country as immigrants.

“I am so happy to be here celebrating the unveiling of the Eastern Gateway. My maternal grandmother came on the ship to Hawaii to work in a plantation, and the fact that I am here toda. It’s a big day for Filipinos all around,” she said. (Carrere, a Grammy Award winner for her music and a former model, will join stand-up comedian Jo Koy, in a movie “Easter Sunday” out on August 5).

In addition to the official ribbon cutting and lighting ceremony on Saturday, there were cultural performances and HiFi community organizations, such as the Pilipino Workers Center, Search to Involve Pilipino Americans, and Filipino American Service Group Inc., had booths along Beverly Boulevard.

[OPINION] ‘Tuloy ang laban’: The perception of victory is not true victory if the truth is trampled on and the election process is corrupted to diminish the will of the people