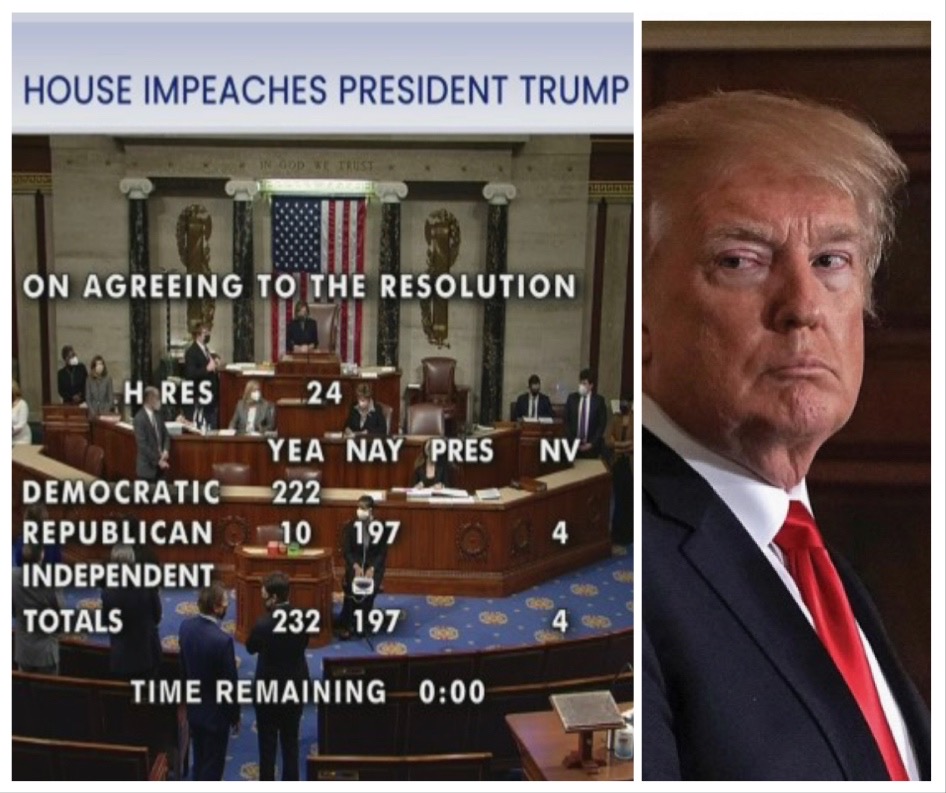 BE HONEST. Let us all be honest in answering this very important question: What would and should true patriotic law-abiding citizens and supposed truth, fairness and justice-seeking Christians in America do when United States President Donald Trump is now the leader and inciter of an insurrection to overturn election results and assault the democracy of the nation and the people he swore to serve?

Nearly four years ago, the businessman-turned-leader of the free world was inaugurated and took the solemn oath as stated in Article II, Section I, Clause 8 of the U.S. Constitution: “I do solemnly swear that I will faithfully execute the office of President of the United States, and will to the best of my ability, preserve, protect and defend the Constitution of the United States.”

But, in his time in office, Trump has been the biggest threat to our national security, and has failed in fulfilling his solemn duties and obligations as president.

Five people have died because of mob riot, with the U.S. Capitol security breached and offices and hallways of this historic august chambers vandalized and destroyed by Trump’s blind followers — carrying out his marching order to FIGHT based on lies of his votes and victory stolen, dismissed to be without merit by no less than the Supreme Court and other officials and watchdogs of the election.

Yes, they too took an oath of office, pursuant to Article VI of the Constitution which states that other officials, including members of Congress, “shall be bound by Oath or Affirmation to support this constitution.”

Our Founding Fathers had the foresight that someday, there would be an elected leader who would abuse the power and public trust accorded to the Office of the President and other powerful posts in government that is why the Constitution had been written to demand accountability from each and every public servant.

One important point that writer Jeff Neal wrote for the Federal News Network on the oath of office and what it means is very much a reminder not only for our federal employees. This is also a wake-up call for us citizens on what to expect and demand from our public servants:

“One thing that federal workers often hear is a career supervisor or political appointee talking about loyalty to the agency or the boss. One purpose of the Oath of Office is to remind federal workers that they do not swear allegiance to a supervisor, an agency, a political appointee, or even to the President. The oath is to support and defend the U.S. Constitution and faithfully execute your duties. The intent is to protect the public from a government that might fall victim to political whims and to provide a North Star – the Constitution – as a source of direction.”

This is where we are now — facing a crossroads, about to embrace a defining moment that will determine the fate of our democracy in a government intended by the Constitution to be of the people, for the people, by the people.

The power is ours to use to demand accountability from our public officials, lest we become complicit to enabling, condoning and nurturing a dictator who abuses the power and public trust for his/her own personal and political agenda.

The power is ours to choose whom to give our loyalty: to the Constitution or to Donald J. Trump.

The power is ours to demand the same from the public officials in the executive, legislative and judiciary co-equal branches of government — obligated to fulfill its oversight function and checks and balances responsibilities so that no person, no office, no branch of government will abuse the power and destroy our democratic institutions and processes.

On Wednesday, January 13, barely a week before the inauguration of President-elect Joe Biden and Vice President-elect Kamala Harris — who both won decisively in the November elections, certified by our electors pursuant to the rule of law and the Constitution — we, the people, would have to be fully engaged in the impeachment process initiated by the House of Representatives.

“The sole article of impeachment that the House is expected to pass Wednesday charging Trump with high crimes and misdemeanors is damning. Its simple clarity explains why this impeachment is no mere futile partisan ritual in the waning days of the most aberrant presidency in history,” CNN reports.

“Donald John Trump, by such conduct, has demonstrated that he will remain a threat to national security, democracy, and the Constitution if allowed to remain in office, and has acted in a manner grossly incompatible with self-governance and the rule of law,” the article reads.

Congress passed a resolution on Tuesday, January 12, urging Vice President Mike Pence to invoke the 25th Amendment to the Constitution. As the  New York Times  reported:

“Lawmakers, escorted by armed guards into a heavily fortified Capitol, adopted the nonbinding measure just before midnight largely along party lines. The final vote was 223 to 205 to implore Mr. Pence to declare Mr. Trump “incapable of executing the duties of his office and to immediately exercise powers as acting president.”

Pence, however, wrote a letter to House Speaker Nancy Pelosi saying he would not invoke the 25th Amendment to remove Trump from office, saying “I will not now yield to efforts in the House of Representatives to play political games at a time so serious in the life of our nation.”

Pence also wrote to urge members of Congress to “avoid actions that would further divide and inflame passions of the moment.”

Let the truth be told — Vice President Pence has been complicit in Trump’s efforts to divide and conquer the nation in the past four years. He did nothing, said nothing, and even defended and emboldened Trump.

Now, Pence chooses inaction despite what happened on January 6 when he, himself, could have been killed by the insurrectionists who set up a noose on a makeshift gallow, chanting “Hang Mike Pence!” After he defied Trump’s order to overturn the election results, as reported by radio.com.

Pence chooses inaction despite Trump not showing any remorse for what he did and continues on with his toxic and dangerous lies and rhetoric that inflames anger among his fascist base and blind followers.

Pence chooses inaction despite the “FBI warning of plans for armed protests at all 50 state capitals and in Washington, D.C., in the days leading up to President-elect Joe Biden’s inauguration, stoking fears of more bloodshed after last week’s deadly siege at the U.S. Capitol,” according to the Associated Press.

This is the second time that Trump will be impeached, the first time this is happening in the history of presidents in the United States — a testament to the corruption of this man and unfitness to be President. This time, however, we hear more Republicans in Congress coming out to express support for the impeachment of Trump following the January 6 siege of the capitol where their own lives had been threatened.

“Wyoming Republican Rep. Liz Cheney, the party’s third-ranking House leader, announced on Tuesday that she will vote to impeach President Donald Trump, becoming the highest-ranking official from her party to support charging and removing him from office following the Trump-incited riot at the Capitol last week,” CNN reported.

“The President of the United States summoned this mob, assembled the mob, and lit the flame of this attack. Everything that followed was his doing. None of this would have happened without the President,” said Cheney. “The President could have immediately and forcefully intervened to stop the violence. He did not.”

“There has never been a greater betrayal by a President of the United States of his office and his oath to the Constitution,” she added. “I will vote to impeach the President.”

“The Kentucky Republican also sees House Democrats’ drive to impeach Trump as an opportune moment to distance the GOP from the tumultuous, divisive outgoing president.”

BREAKING: The House on Wednesday, January 13 impeached President Donald Trump, adopting a single article of impeachment, voting 232 to 197 to charge him with “inciting violence against the government of the United States” and requesting his immediate removal from office and disqualification from ever holding one again, the New York Times reported.

Ten members of the president’s party joined Democrats to charge him with high crimes and misdemeanors for an unprecedented second time.

More Republicans should do the right thing and protect and defend the Constitution instead of protecting Trump and their political ambitions. After all, during the 2016 Presidential Election campaign season, the high-ranking Republican leadership had been warning us about Trump.

Why do some Republicans still choose to defend him?

One is because of their political survival, and the other reason is because Trump continues to harass Republicans in Congress, threatening them, their safety and the safety of their families. All the more they should vote to remove Trump from office!

The  Times  reported that vote set the stage for the second Senate trial of Trump in a year, though senators were not expected to convene to sit in judgment before Jan. 20, when Biden will take the oath of office. But who knows what McConnell might do to surprise us before then to fulfill their obligation to follow the Constitution.

The House has impeached Trump. The Senate has to convict Trump. NOW. Let us ALL save the democracy of the United States of America.

Gel Santos Relos has been in news, talk, public service and educational broadcasting since 1989 with ABS-CBN and is now serving the Filipino audience using different platforms, including digital broadcasting, and print, and is working on a new public service program for the community. You may contact her through email at [email protected], or send her a message via Facebook at Facebook.com/Gel.Santos.Relos.

Trump impeached for second time, charged with ‘incitement of insurrection’

[OPINION] The silent majority of Americans are silent no more: Trump is fired, Biden wins the presidency

Meet the Fil-Am millennial serving as a Trump campaign spokesperson