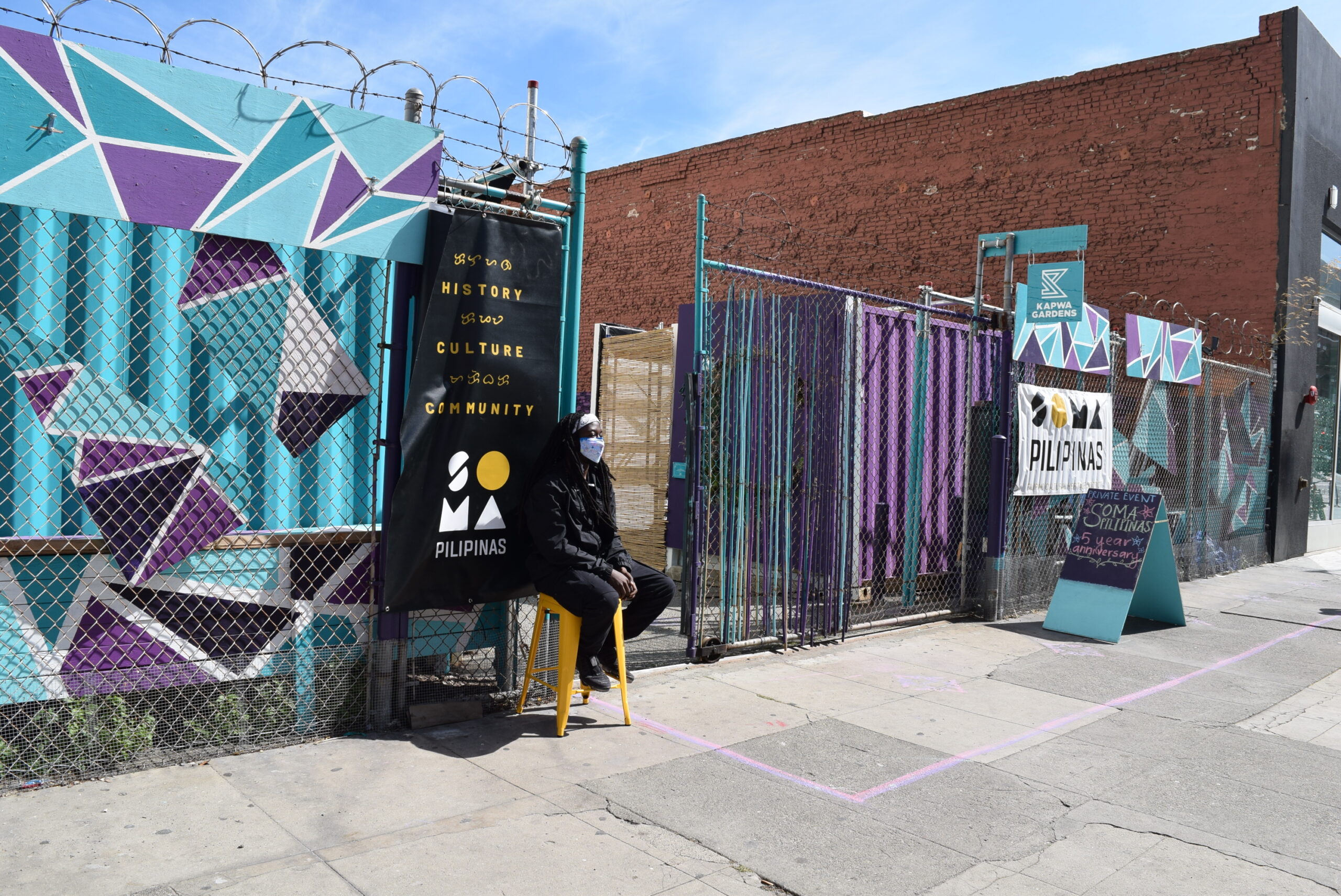 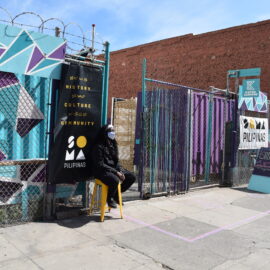 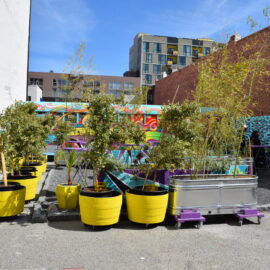 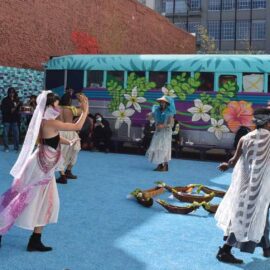 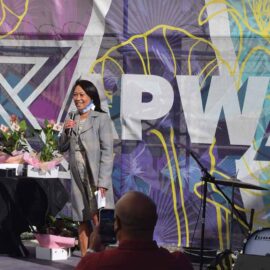 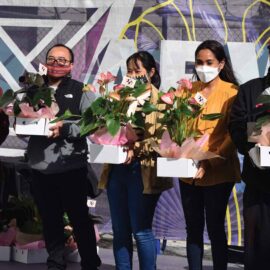 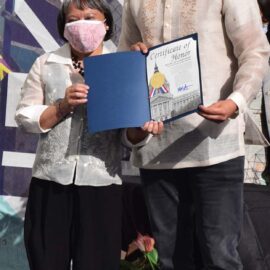 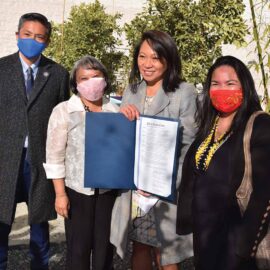 KAPWA GARDENS OPENS IN SF. A new space where Filipino Americans can gather in the South of Market area in San Francisco opened on April 14. Located at 967 Mission Street, Kapwa Gardens is open Wednesdays to Sundays from 10 a.m. to 6 p.m. and will feature an array of activities. | AJPress photo by Joseph L. Peralta 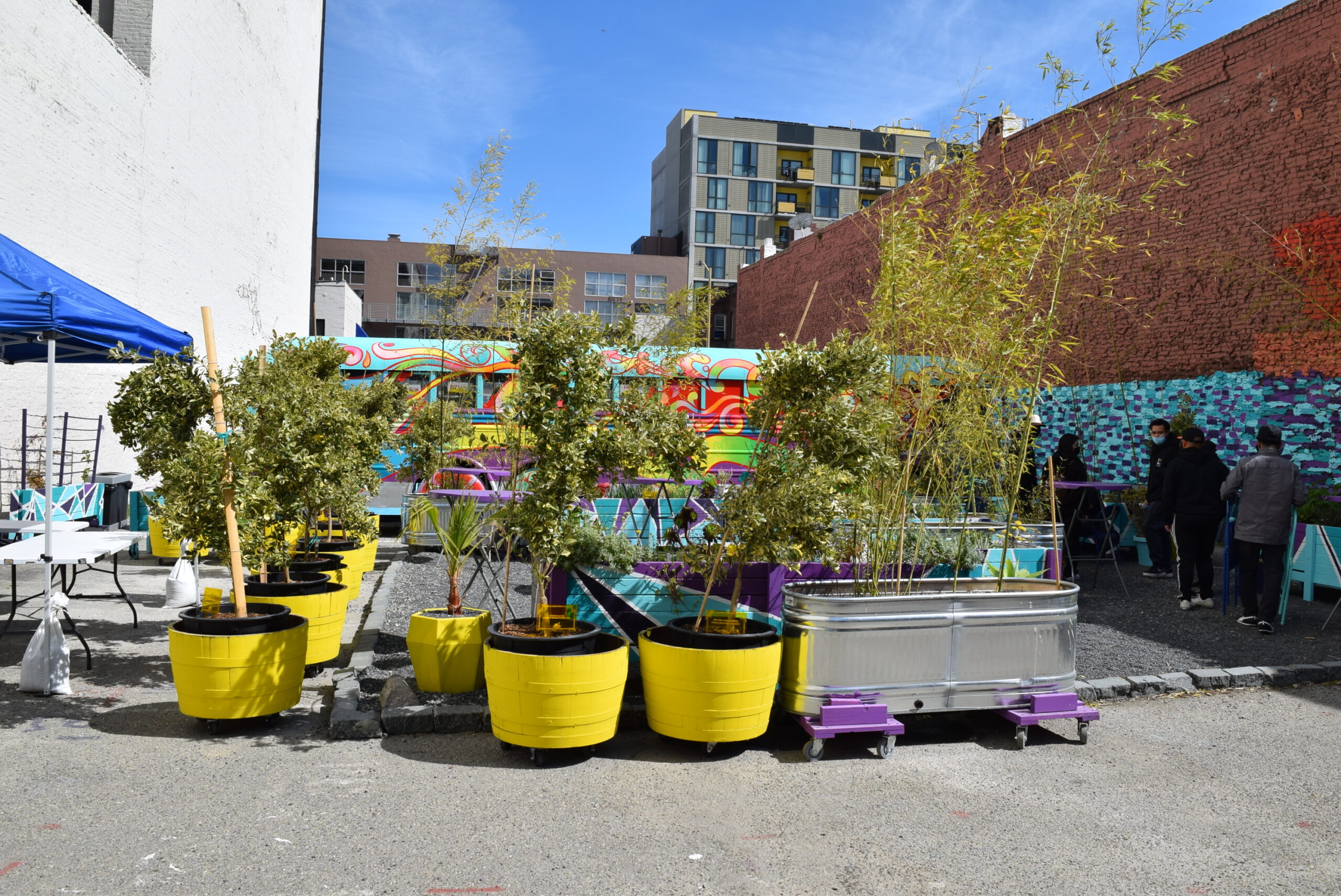 The downtown Fil-Am oasis features seating areas and a decorated bus (inset), as well as a stage for live performances. | AJPress photo by Joseph L. Peralta

Members of Lakbai Diwa perform a dance during the program at the SOMA Pilipinas 5-year anniversary celebration. | AJPress photo by Joseph L. Peralta 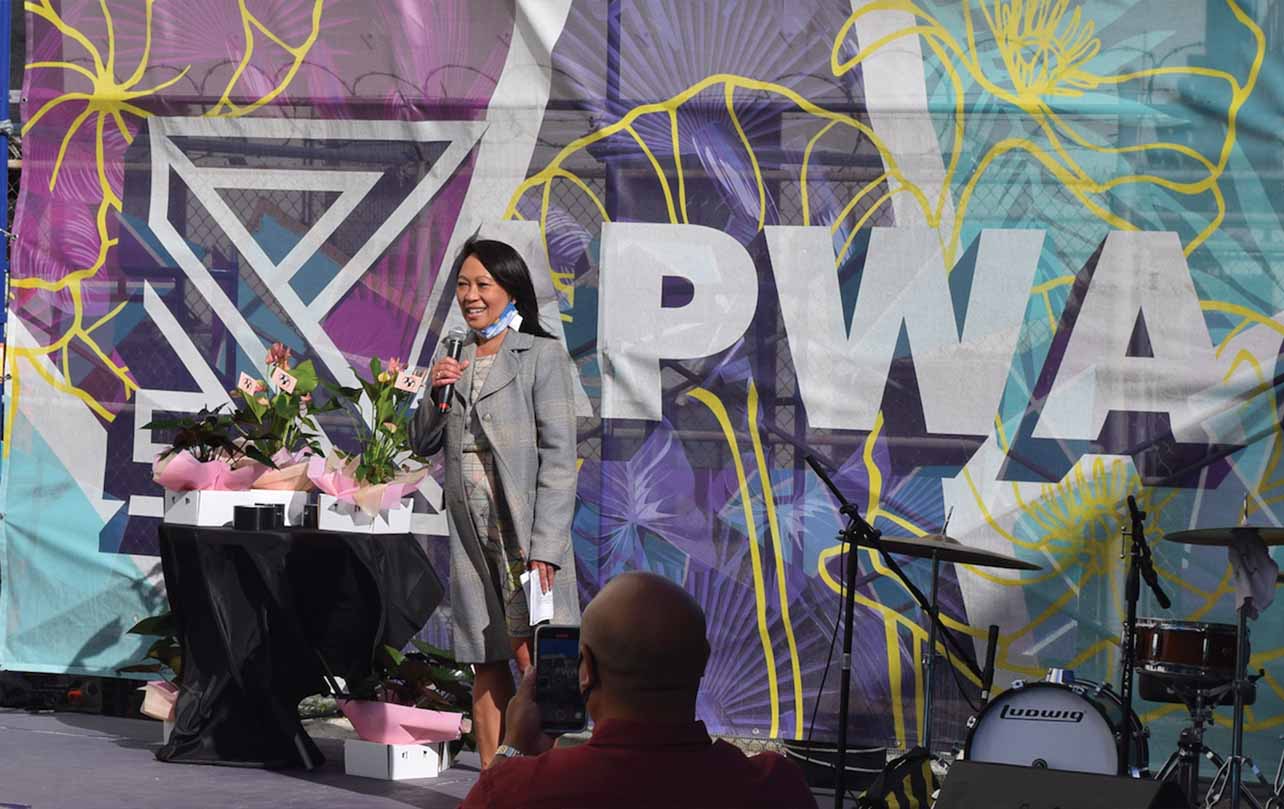 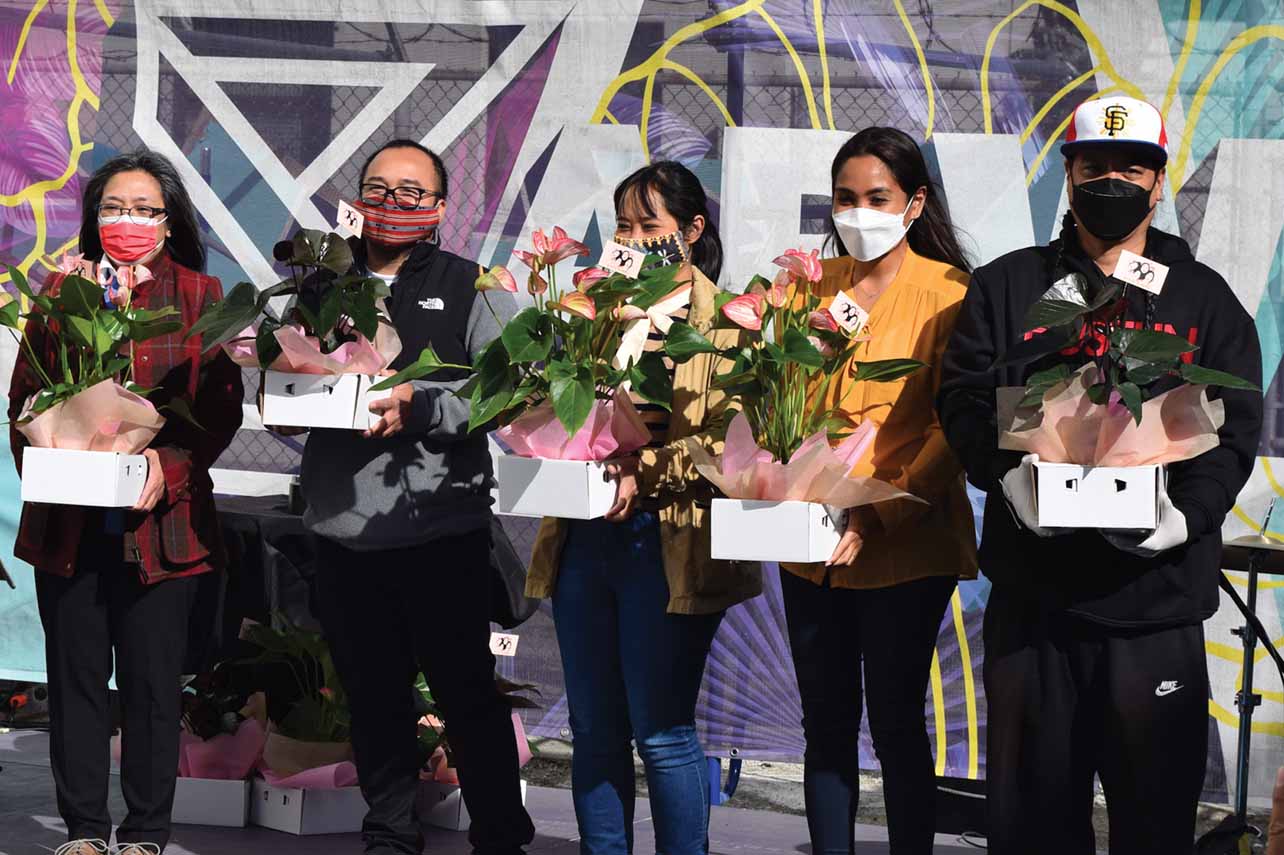 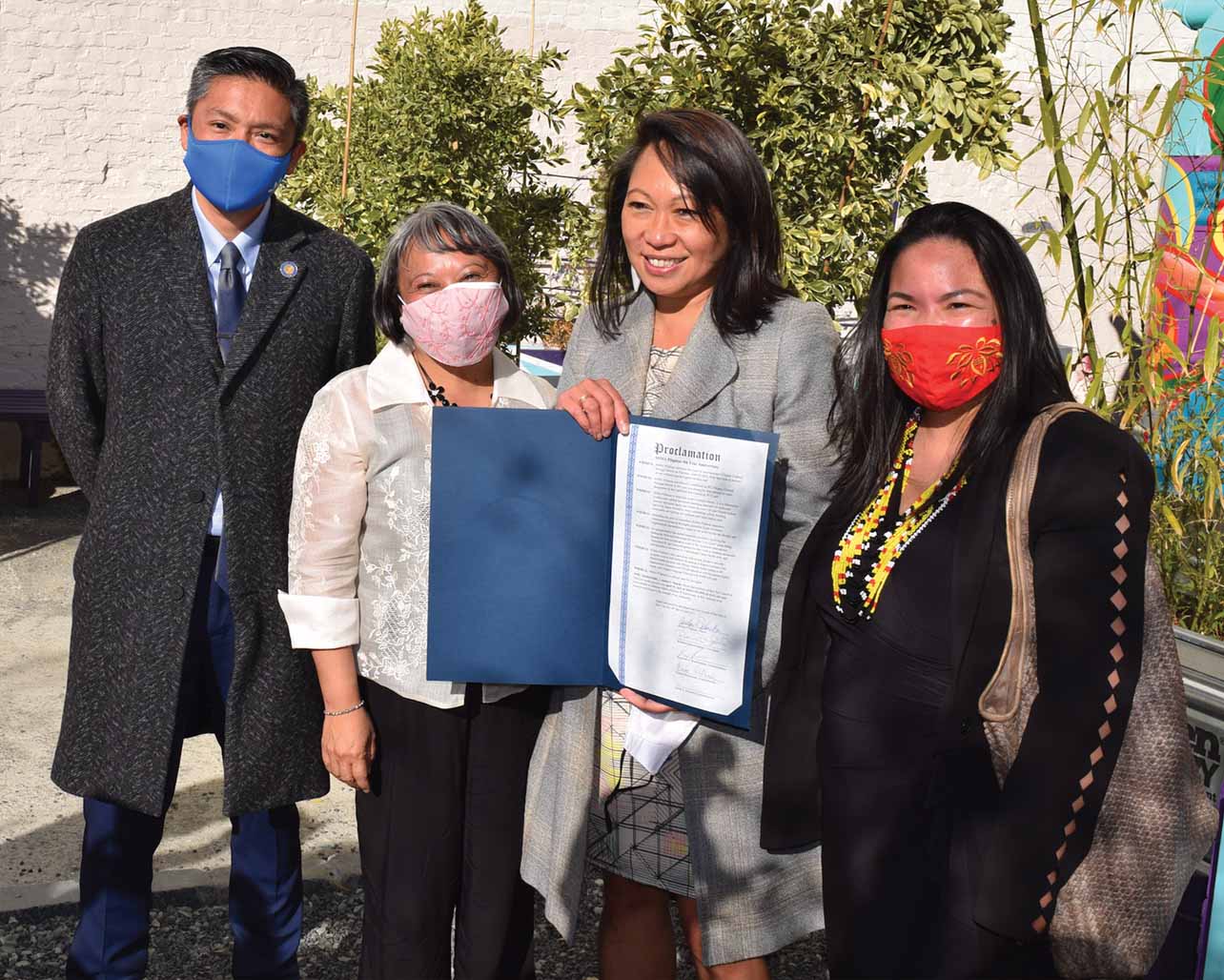 SAN FRANCISCO – Trendsetting cultural district SOMA Pilipinas marked its fifth year of advocating for Filipino residents, businesses, heritage and culture/arts in the South of Market (SoMa) area as it hosted an event limited to 100 guests at the newly-opened Kapwa Gardens on Thursday, April 29.

Led by executive director Raquel Redondiez, SOMA Pilipinas was the first cultural district established in the city in 2016. It celebrates and highlights the decades-long presence, historical legacy and contributions of the Filipino American community in the SoMa neighborhood and San Francisco.

SOMA Pilipinas has also advocated and fought for Fil-Am residents of the city, some of whom have been driven out and priced out amid the tech boom in the city and rising rent and real estate costs.

The brief program included the acknowledgment of community heroes and sheroes who extended assistance to the needy in the community during the pandemic, introduction of members of the SOMA Pilipinas working group and remarks by San Francisco District 6 Supervisor Matt Haney and Redondiez.

Also acknowledged during the program was Bernadette Sy, who is executive director of the Bayanihan Community Center and the Filipino American Development Foundation.

Haney presented Sy with a certificate from the Board of Supervisors that mentioned Sy’s exemplary leadership as well as her valuable contributions and guidance in the establishment of SOMA Pilipinas.

“Thank you, everyone. Everyone here is a friend, and I stand on your shoulders. You guys did all the work. I’m here to always support everything that you’ve done. So everyone, take a look around, it’s because of all of your work. And I’ve always known that this community was important to this neighborhood. And you just need someone to always believe that.

And the first person to believe that is you. And as long as you take ownership of that, we will continue to thrive in this neighborhood,” Sy told the audience.

In an interview with the  Asian Journal, Redondiez said that while it has been a daunting task to make a difference, especially during the pandemic, SOMA Pilipinas has made a lot of headway in the past five years.

“I can truly say that in the last five years, we’ve really raised the visibility of the Filipino community not just in San Francisco but in the region, being recognized as a California cultural district,” Redondiez said.

“We’ve increased opportunities for artists – community-based artists, Filipino artists – to get funding to be able to continue their craft, to preserve their culture, to make films and music. And so that means a lot, not just for future generations of Filipinos but also for the seniors to be able to have a place here in the city where they can hear their language, where they know their kids or their grandkids can learn their history and their culture and can see art, public art, that reflects their community. We’re very thankful to be able to be part of that,” she continued.

Of the accomplishments of SOMA Pilipinas, Redondiez is particularly proud of their fight to stop the displacement of Filipino families, residents and businesses in the area.

“Our biggest mission is to stop the displacement of Filipino residents and I think we’ve supported in doing that. We protected the Victoria Manalo Draves Park – it was going to be shadowed by a luxury development, and we blocked that in the city. We were able to claim this space (pointing to Kapwa Gardens) and turn it into a beautiful oasis so that coming out of the pandemic we can have a place to gather safely. Most importantly, we are continuing to organize and kind of build the unity of the community so we have a stronger voice. With the cultural district, we have stronger recognition as a community.

Filipinos, we were losing ground here in San Francisco…with the tech boom, we lost half of our population. We know so many families have been priced out of the city, but at the same time we are the largest API group here in California,” she stated.

The SOMA Pilipinas executive director said that the community has many things to look forward to, revealing that they are hard at work to establish cultural cornerstones in the city, with Kapwa Gardens as one of them. Other planned cornerstones include Republika, a pop-up to permanent retail space; a new performing arts center; a barangay center; a gateway on Folsom and Russ Streets; decorative crosswalks on 6th Street; historic signs at South Park and Heroes Village; and regular street signs that have SOMA Pilipinas underneath it.

According to Redondiez, the gateway was the number one thing that came out in a survey of community members who want a gateway like those found in Chinatown, Japantown and Little Saigon. They are currently working with an architect for the preliminary designs and artists for the concepts.

When asked how the community can help SOMA Pilipinas thrive and continue its mission, Redondiez said, “Coming out here is a big help. This space (Kapwa Gardens) was made by 350 volunteers from all over. We have a lot of cultural events… coming out to support those cultural events, coming out to support the businesses that are here. When we have political campaigns, too, like stopping the displacement of families or even to demand more affordable housing, I think people can come and support those efforts as well.”

“We’re going to launch a sustainer campaign. Our funding for the cultural district is mostly from the hotel tax and we know that the hospitality district was hit hard. We don’t know what our funding will be next year. And so, we’re going to launch a sustainer event to ask people to support monthly, quarterly, yearly, whatever they can do because we really want this to be a community-driven grassroots cultural district that’s supported and fueled by the participation and contribution of everyday Filipinos,” Redondiez added.

For his part, Haney told the  Asian Journal  that SOMA Pilipinas started the conversation about cultural districts.

“There was this idea that we could have, identify an area of our city where there’s a cultural legacy and a longstanding community of a certain culture that is facing displacement, and that we would actually put protections and resources for businesses, residents… we would make art and make space that celebrates them and ensures that they feel included and protected here. And this was one of the first, along with 24th Street in the Mission, and now there are a total of eight. I have three in my district. It all started with this,” the District 6 Supervisor said.

Haney added that even though SOMA Pilipinas is just five years old, many communities and groups are looking up to it as a role model.