“The Oprah Winfrey Show” on Channel 7, KABC was the last television show I developed an attachment for, which lasted 25 years.

On her shows, she had a way of looking at her guests’ eyes, to which she would describe “lighting up,” when she would bring up something dear to their hearts or in tears, when her question triggered a sad experience or even transcending a struggle within themselves.

Once, in LA, at the party for the film, “Precious,” I told Oprah in passing: “Thanks for bringing the light,” while she was being ushered out by her female bodyguards.

“Yes, we all need the light,” she glanced and looked at me over her shoulder.

Last Friday, June 8, 2018, her exhibit opened at the National African American Museum that will continue until June 2019.

June 8 was the same day that Anthony Bourdain, at age 61, was found dead from an apparent suicide, by chef Eric Ripert, his best friend. They were working on an episode for “Parts Unknown,” Bourdain’s CNN television show.

Word of his death traveled fast, through social media, and fans left flowers, love letters and notes of gratitude on the windows and doors of Brasserie Les Halles, a New York restaurant, where he was the executive chef.

In 1999, he wrote an essay, “Don’t Eat Before Reading This,” and his mother suggested he submit it to The New Yorker, which he did, and got a call back offering him $50,000 to write a book.

At that time, he was dunking French fries, and writing this book gave him a better alternative. “Kitchen Confidential” became a bestseller as it was “pulling back the curtain on the restaurant industry,” wrote Sarah Berger of CNBC.com.

That big break from “Kitchen Confidential” led to shows on the Food Network, Travel Channel and for 11 seasons now, on CNN.

“Parts Unknown,” streaming on Netflix, would have ended June 16, but fans clamored after his death and now, the streaming continues.

Many binge-watched past episodes, and posted their grief and shock on social media, while many others wrote about meeting him.

Angela Dimayuga wrote a piece on BonAppetit.com which made me cry.

She wrote, “We talked about my new position at The Standard, and he said, ‘That’s a perfect job for you, and suits you. They are lucky to have you. It will be a place you can grow your vision.’

“He had noticed all the collaborative work I had been doing, and he said that my work with artists was especially intriguing to him. He told me that my intersectional approach to work and craft was necessary to the food industry, and that what I’m doing for the future of the food world is important.   I felt so seen: I knew he was keeping on eye on me, but I never thought he was looking this closely. Then he offered to become my mentor. He said there weren’t many people he’d be happy to pick up a call from at any hour of the day, but that I could call him at 2 a.m. and he’d answer. I came home that night feeling transformed. I had an instinct, an excited stirring in my belly that told me that something important was happening and my life was about to change drastically. I was excited for our intertwined futures.”

Personally, I have since re-watched six episodes of “Parts Unknown.” In these episodes, one senses his intense passion for good food, equally curious about folks he meets, spending time to discern their personal and cultural strengths, as much as absorbing their wisdom.

His people-centered sensibilities were particularly obvious in his episode in Manila, where he opens with the balikbayan box and follows a matriarch of the family who cooks kare-kare.   Bourdain finds the time to share a letter from a man, raised by this matriarch in the U.S., whom she cared for 30 years before coming home to retire.

One wonders if his boundless energy would ever run out.

In Myanmar, he rode the train to Bagan, where thousands of the oldest Buddhist temples were built centuries ago. The grueling train ride of ten hours became nineteen hours. He realized that he was either “getting back on the train or a coffin,” given “derailment and rail slips.”

After 75 stops, samosas and a bouquet of fish bought from street vendors at train stops, beers, and a nap, he arrived at his destination.

Built by artisans, Bourdain sadly narrates that slave labor made these temples possible. He climbed the temple steps, paused long enough to appreciate the landscape with red steeples sprouting as if trees in the verdant background, with thousands more red brick temples, as far as the eyes can see.

In Quebec, he traveled by train with two chefs, in “wind-shipped streets where testicles shrink,” while his friend jokingly refers to the city “where the frigid cold keeps out EBOLA.”

They partake of their breakfasts of bagels with cream cheese and caviar; “serviceable omelettes, foie gras, and garnished with truffle shavings.”

Where did the black truffles come from, one might ask, as they are not a staple of rail service? His chefs-friends came prepared with their own supply of expensive truffles, and a grater.

A chef joked that their “food is feces in the making,” while Bourdain gives the cuisine a rating of beyond excellent, and appreciated flambé dinners that were served in Quebec’s continental restaurants.

He has a unique sense of wonder, delightful at times, childlike in tasting ingredients foreign to him, but with an openness to try them all, and while he knew about politics in the countries he visited, he noticed the incremental changes, especially with his multiple visits to Vietnam. He treated each country he visited with respect, as its people.

In Myanmar, ruled by the military for five decades, he sought interviews with previously jailed publishers of newspapers and the absurdity of the censored press. There, the military leaders would cut and paste news from foreign sources and even chose musical lyrics for composed songs.

One wonders what happened to Bourdain — the curious, lively, joyful person that was transparently conveyed in these episodes. He often said that his travels affected him, as much as he left his footprints in these countries.

Especially poignant was his trip to Vietnam when his tour guide showed him an earlier photo of Bourdain, with black hair, next to the tour guide’s young boy. The metamorphosis is obvious for both – Bourdain now has silver hair and the once young boy is now an adult.

In Vietnam, Bourdain shared a meal with former President Barack Obama and asked him: “Would my daughter be able to come here and eat, bun cha?”

Bourdain acknowledged the diplomacy inroads that the president has made, including reaching out to Iran and Cuba. Cuba has had sanctions imposed on them for decades, which were lifted, while Iran had sanctions lifted by Obama, only to be reimposed by Trump.

Obama reassured Bourdain that progress is not linear, that while at times we might not see the changes, yet there has been a lot. And yes, his daughter can travel to Vietnam and enjoy her bun cha one day.

I wondered even then as he put the question to the president why he did not include himself as part of this future trip to Vietnam, a favorite country of his to visit? Did he have a premonition, as his casual references to death in some of his episodes or the bodies lost to war and conflicts’ casualties?

Psychologists say that suicide leaves a permanent shadow on the surviving family members, much like Ernest Hemingway — that even after several generations have passed, his descendants worry about their genetic predisposition to suicide.

In Bourdain’s case, his 11-year-old daughter, Ariane, was “strong and brave” performing at a concert, two days after her father’s apparent suicide at a hotel in France.

Bourdain, as you travel to the pearly gates, may you be surrounded by God’s angels and may you find your peace.

It is appropriate that you once wrote about how people in a country performed good acts, their form of “merit accumulations” as a way of increasing karma, and I dare say you too, increased your karma, by helping folks anonymously reach their dreams. We are just too sad that you slipped away so fast and too soon!

Prosy Abarquez-Delacruz, J.D. writes a weekly column for Asian Journal, called “Rhizomes.” She has been writing for AJ Press for 10 years. She also contributes to Balikbayan Magazine. Her training and experiences are in science, food technology, law and community volunteerism for 4 decades. She holds a B.S. degree from the University of the Philippines, a law degree from Whittier College School of Law in California and a certificate on 21st Century Leadership from Harvard’s Kennedy School of Government. She has been a participant in NVM Writing Workshops taught by Prof. Peter Bacho for 4 years and Prof. Russell Leong. She has travelled to France, Holland, Belgium, Japan, Costa Rica, Mexico and over 22 national parks in the US, in her pursuit of love for nature and the arts. 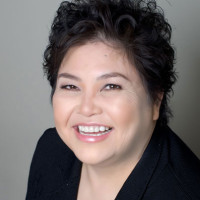 Prosy Abarquez-Delacruz, J.D. writes a weekly column for Asian Journal, called “Rhizomes.” She has been writing for AJ Press for 13 years. She also contributes to Balikbayan Magazine. Her training and experiences are in science, food technology, law and community volunteerism for 4 decades. She holds a B.S. degree from the University of the Philippines, a law degree from Whittier College School of Law in California and a certificate on 21st Century Leadership from Harvard’s Kennedy School of Government. She has been a participant in NVM Writing Workshops taught by Prof. Peter Bacho for 4 years and Prof. Russell Leong. She has travelled to France, Holland, Belgium, Japan, Costa Rica, Mexico and over 22 national parks in the US, in her pursuit of love for nature and the arts.