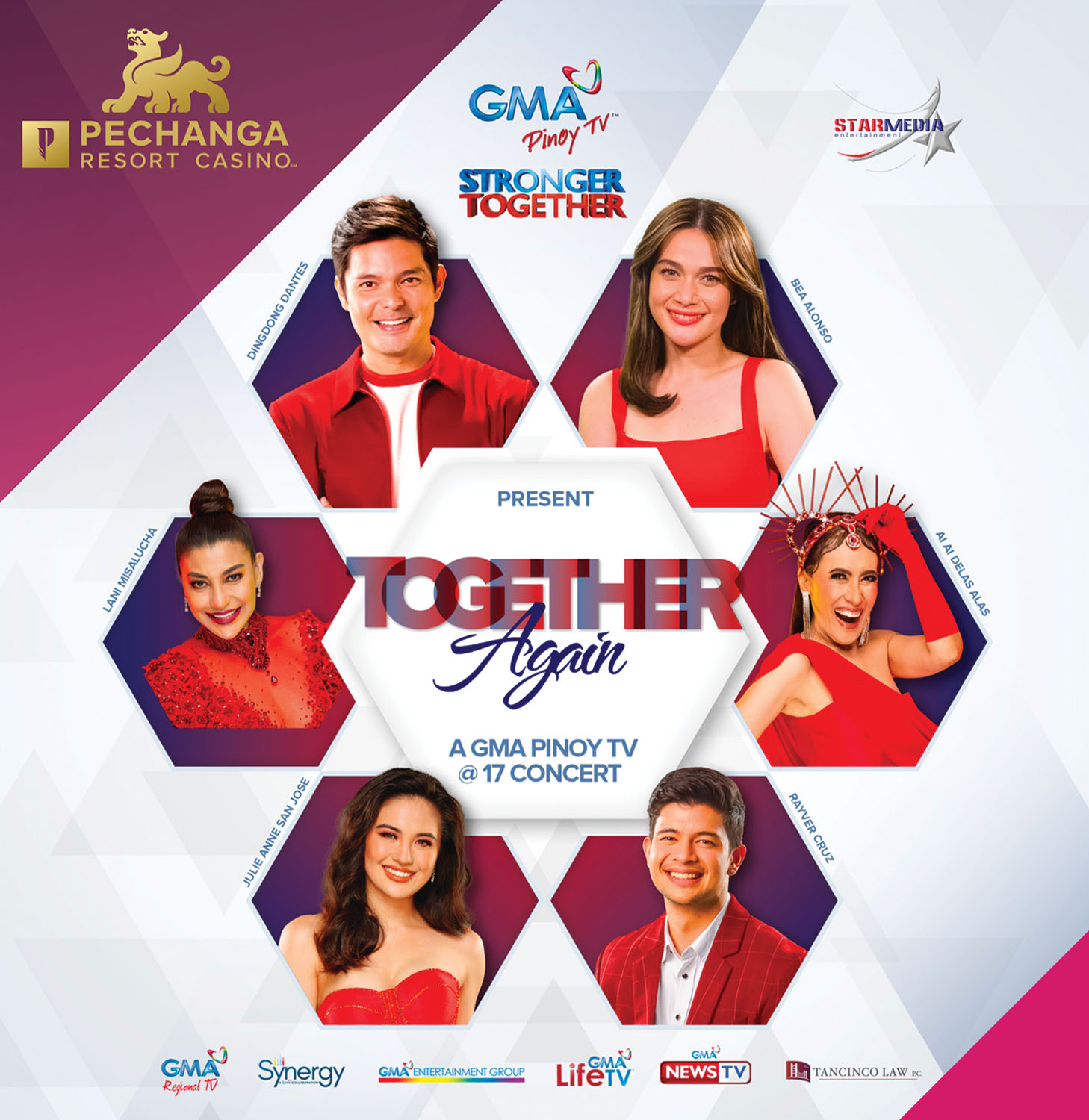 SIX of the most sought-after singers, comedian, and showbiz personalities from Manila, led by famed actor Dingdong Dantes, takes centerstage at the Pechanga Resort Casino as they perform in a live concert entitled “Together Again,” on September 24 and 25 at 6 p.m.

Pechanga Resort Casino is well-known for hosting only the best and the brightest Filipino entertainers and performers aimed to provide the ultimate experience, especially to its Filipino-American patrons.

The long wait is over as famed television and showbiz performers come to perform live next month. With Dingdong are a host of the best celebrities under GMA Pinoy TV — Bea Alonzo, Lani Misalucha, Ai-ai Delas Alas, Julie Anne San Jose, and Rayver Cruz — who will showcase different talents in singing and comedy stints.

Dantes, a multi-awarded actor, is also famous as a commercial model, dancer, TV presenter and film producer. He is married to the beauteous actress, Marian Rivera.

The ‘Darling’ of cinematic screen known for her TV drama series and a string of hit movies depicting real life stories, multi-talented Bea Alonzo, also pursued to be a screenwriter-novelist to hone her skills.

Internationally acclaimed singer, Lani Misalucha, the Philippines’ Nightingale, earlier dubbed as the “New Siren of the Strip” during her stints in Las Vegas, is the only Asian to have captured the headlines in a main showroom at the Vegas strip.

Ai-Ai Delas Alas, alongside the group, is the life of the party. The “Queen of Comedy” will once again showcase her talents for never-ending fun and laughter.

At the heart of it all are two award-winning singers and actors — Julie Anne San Jose, bringing along her talent as a songwriter, musician and top-rated stage performer and artist, while Rayver Cruz, who has risen from being a child actor in a comedy sitcom, will wow the crowd his dancing and performing skills.

There is no way to miss this! Doors open at 5 p.m., and showtime starts at 6 p.m. at the Pechanga Theater.

Shows in the Pechanga Theater offer a comfortable and intimate concert experience. With 1,200 seats in its theater, each show features state-of-the-art, acoustically perfected sound, plus comfortable chairs, and an up-close view from every theater seat.

Pechanga Resort Casino offers one of the largest and most expansive resort/casino experiences anywhere in the United States. Voted the number one casino in the country by USA Today and rated a Four Diamond property by AAA since 2002, Pechanga Resort Casino provides an unparalleled getaway, whether for the day or for an extended luxury stay. Pechanga offers more than 5,400 of the hottest slots, 152 table games, world-class entertainment, 1,100 hotel rooms, dining, spa and golf at Journey at Pechanga, Pechanga Resort Casino features a destination that meets and exceeds the needs of its guests and the community. Pechanga Resort Casino is owned and operated by the Pechanga Band of Luiseño Indians. For more information, call toll free (877) 711-2946 or visit www.Pechanga.com. Follow Pechanga Resort Casino on Facebook, Instagram and on Twitter @PechangaCasino.

Pechanga Resort Casino celebrates the Year of the Rabbit with $100,000 EasyPlay, cash drawings

Pinoys in the U.S. honor Philippine culture and history in “Maria Clara at Ibarra” watch party

Pechanga Resort Casino welcomes you back to golf at Journey with new health, safety measures