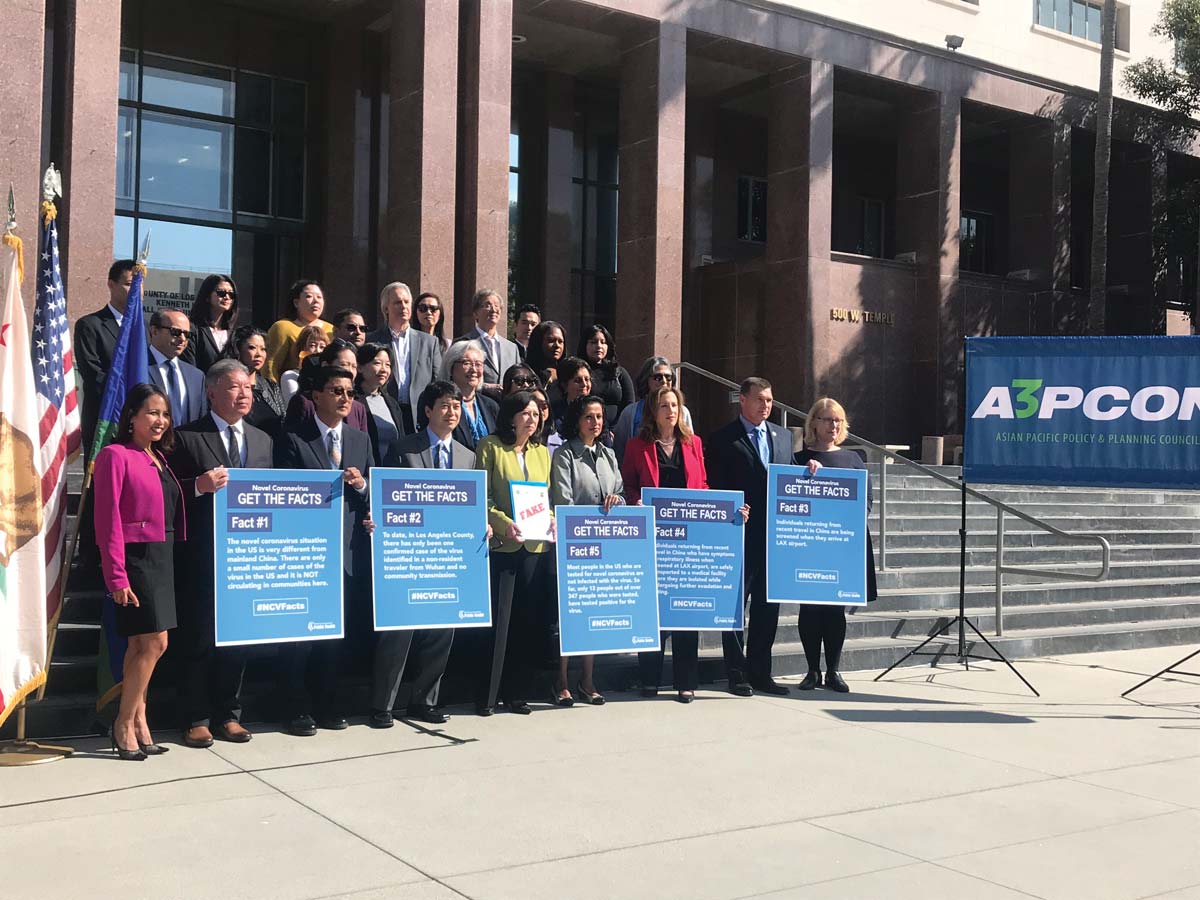 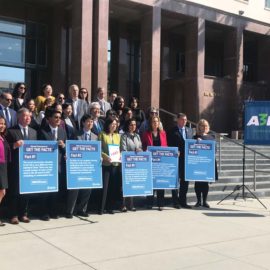 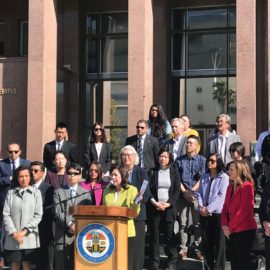 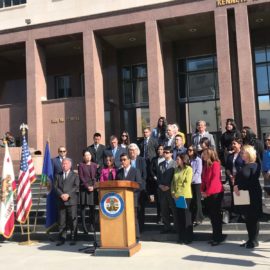 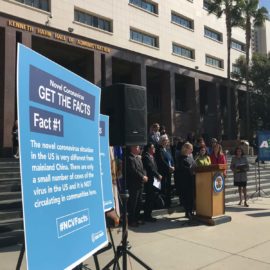 Community leaders of the LA County are encouraging all to report all acts of hate toward APIs regarding the coronavirus to the authorities. AJPress photos by Klarize Medenilla 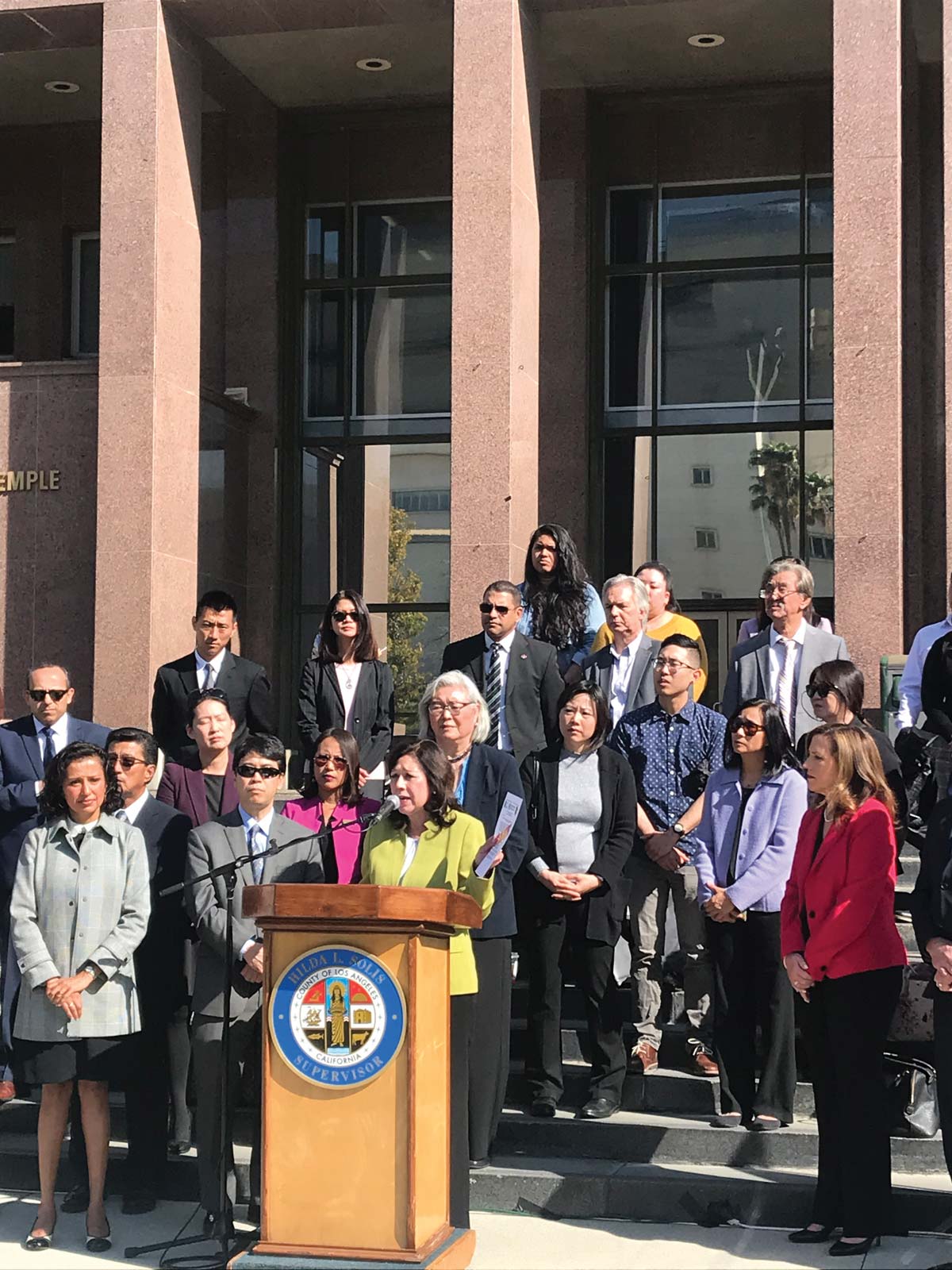 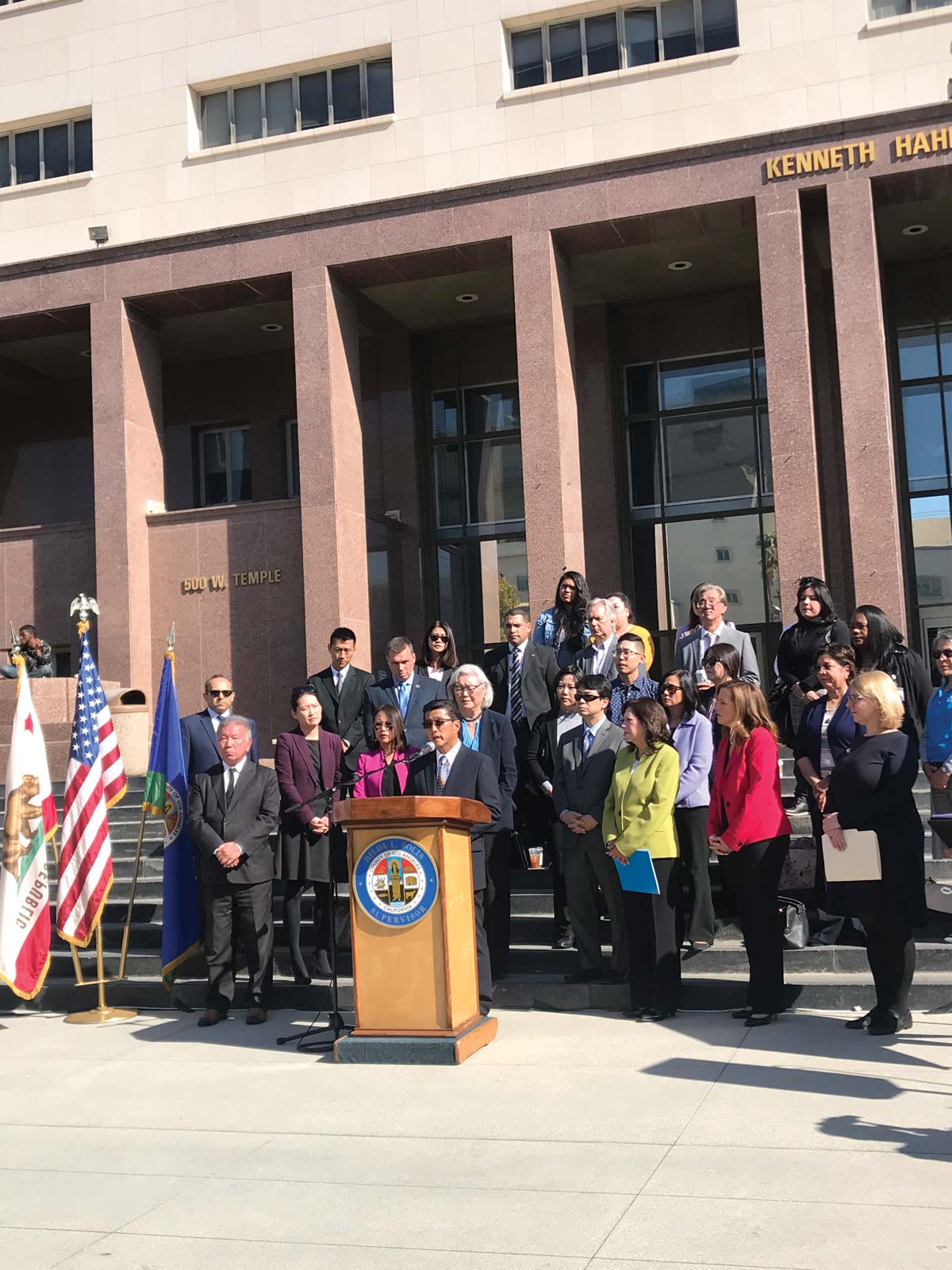 The press conference on Thursday addressed the importance of verifying facts and responsible information sharing on social media. 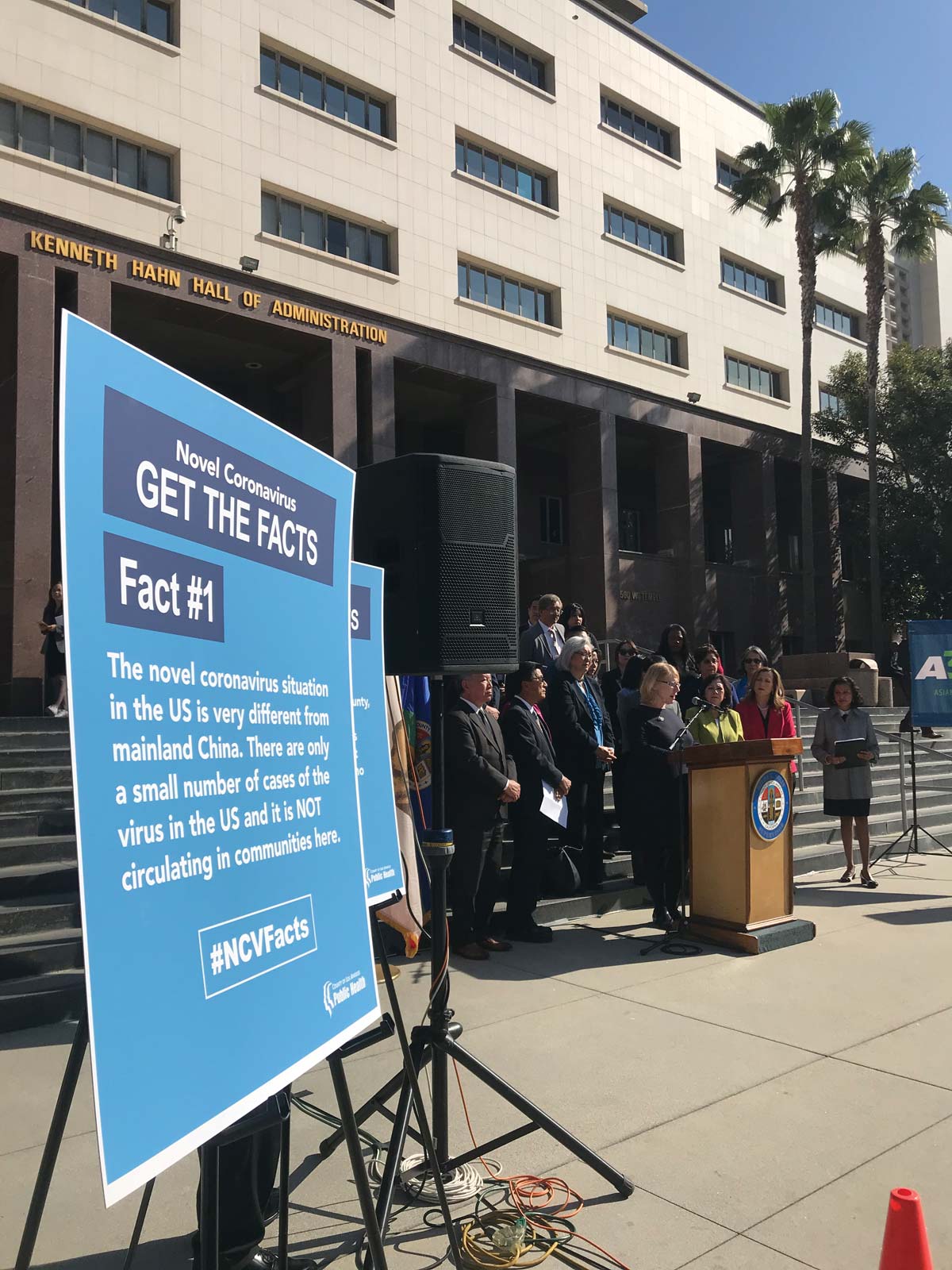 Supervisor Hilda Solis addresses the flyer that falsely claimed there were cases of coronavirus in Carson, California that listed Asian-owned businesses as connected with infected individuals. | AJPress photo by Klarize Medenilla

AS public health officials, scientists and the medical community are currently researching to combat and mitigate the spread of the coronavirus, the global Asian community has been fighting its own battle against xenophobia, racism and acts of hate.

Aided by the flood of misinformation that has catalyzed mass hysteria regarding the mysterious virus (officially called COVID-19), the reactions to the virus have resulted in acts of hate, harassment and at least one hate crime.

In Los Angeles County, which is home to roughly 1.5 million Asian residents, mass hysteria has come in the form of fake flyers falsely claiming cases of coronavirus in the county, paranoia over seeing people wearing face masks and general “acts of hate” directed toward the Asian and Pacific Islander (API) community, according to LA County Supervisor Solis.

“We’ve got to stop the lies that are being spread around,” Solis said at a press conference in Grand Park in Downtown LA on Thursday, February 13. “We know there’s a lot happening on social media, which is not helping this matter. And anyone that discriminates in that manner and puts out false information should be investigated.”

Solis said that the FBI is launching an investigation into the dissemination of false information, and although she provided little details about the investigation, she promised the county would do its due diligence by combating false theories as a way to protect residents of LA County, especially the API community.

She and other community leaders at the press conference urged all residents to report acts of hate through the county’s hotline 211. (For emergencies, go straight to 911.) She also encouraged members of the community to use the hotline to report instances of false information being spread about the virus.

A flyer, stamped with a doctored logos of the World Health Organization (WHO), the Centers for Disease Control (CDC) and the LA County Dept. of Public Health, that falsely claimed that there were cases of coronavirus in the City of Carson, California quickly went viral on social media, amplifying existing hysteria. The flyer listed Asian-owned restaurants and shops to avoid in Carson and Torrance lest patrons risk contracting the disease.

The falsehoods lined up in the flyer were quickly debunked by the county two weeks ago when Solis and California Assemblymember Ed Chau held a press briefing reiterating that the flyer was fake. That spurred the FBI investigation and the countywide effort to combat the quick spread of unconfirmed and untrue claims regarding the coronavirus.

“This is criminal, and I can attest that there’s probably going to be more of this,” Solis said on Thursday. “There’s tendencies, unfortunately, of people to copycat, and we want to stop that now. There are people who are traumatized right now about this whole incident, people from China and members of the API community who are very troubled.”

There have been reports of bullying and harassment of Asian Americans, who many have targeted being contaminated with the coronavirus infection. Similar to the anti-Asian sentiments that arose during the 2003 outbreak of Severe Acute Respiratory Syndrome (SARS), people have been leveraging the coronavirus scare to verbally and, in some cases, physically harm Asians.

But the difference between the outbreak in 2003 and the current coronavirus epidemic is the pervasiveness of social media, where Asians have been sharing stories in which they’ve been the targets of racially-charged aggression.

As those within the API community are familiar with, many APIs regularly wear face masks as a general protection against germs. But now more than ever, those APIs have been equated to the population in China and throughout Asia who are required to wear the masks amid the coronavirus outbreak.

“We know that when you combine existing prejudices with fear and hysteria, which can been easily generated by the coronavirus or other types of things, that can turn fear and suspicion into hostility and violence,” said Robin Toma, executive director of LA County Human Relations Commission, the county-wide agency responsible for documenting hate crimes.

According to the LA County Human Relations Commission, hate crimes in LA County have risen for the fifth straight year in 2019, increasing 10.3%, the highest level since 2002.

Like Solis, Toma encouraged people to report incidents of hate to 211, which can also provide referrals for mental health resources.

“If a person is told by a business that they’re not welcome because they will scare away customers, that is an actual civil rights violation under a state law,” Toma remarked.

A more severe case of racism occurred in the San Fernando Valley two weeks ago when a middle-schooler was attacked by other youths on the suspicion that he had the coronavirus, a case which is being labeled as a hate crime. The boy was beaten so badly that he required an MRI, officials said.

What is true is that there is currently only one confirmed case of coronavirus in Los Angeles County, and that person is under quarantine.

The novel coronavirus is spread through droplets when an infected person coughs or sneezes and through personal contact. Its symptoms include fever, coughing, difficulty with breathing and severe illness, as previously reported in the Asian Journal.

Despite there only being one case of the virus in a county of 10.1 million, a petition to close schools in Alhambra over the coronavirus risk garnered 14,000 signatures. But efforts like the petition, coupled with the fear perpetuated by social media, has stirred up classroom tension between non-API and API students.

“We need to make sure we are being very intentional and ensuring that we are not giving messages or talking in front of young children and exposing hate,” said LA County Superintendent of Schools Debra Duardo, who also shared that she’s heard hostilities directed towards API youths.

Calling on parents, teachers and administrators to responsibly and calmly inform children of the facts of the virus,  Duardo added, “We will not tolerate any type of racial profiling in our schools and we will address it immediately.”

While it is a priority of the county to quell the hysteria and put forth the facts, the county public health department is also reminding members of the community to take extra care of themselves through thorough hand-washing, staying home if sick, practicing personal hygiene and to get a flu shot.

“People have a right to be afraid and everyone must understand these outbreaks that result in huge human tragedies which impact us all directly or indirectly as a diverse community,” said Dr. Sharon Balter, director of the LA County Department of Public Health. “Embracing, not stigmatizing others and spreading accurate information about what’s happening locally is what helps us manage our fear and will help us protect our community.”