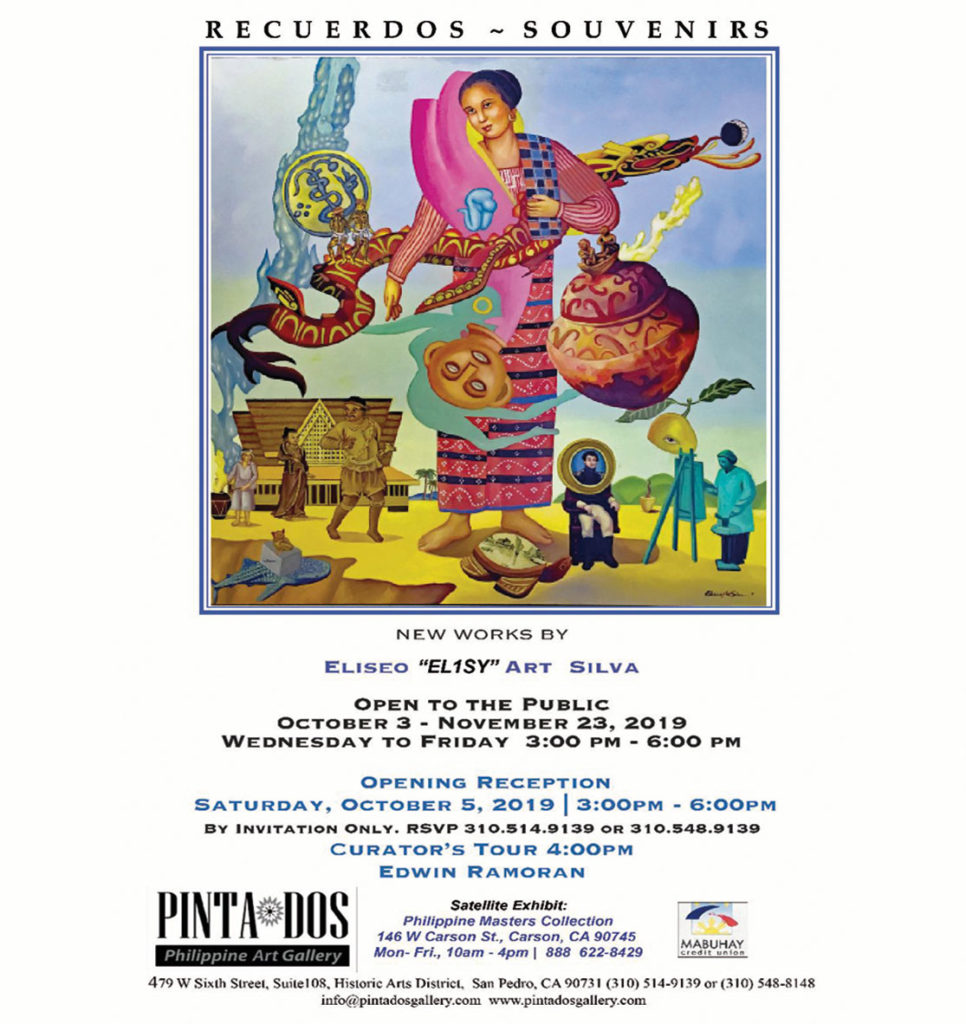 SAN PEDRO, CA - Pinta*Dos is proud to present “Recuerdos-Souvenirs, New Works” by Eliseo Art Silva from October 3 until November 23, 2019. Free and open to the public, the gallery will open on October 3, during the First Thursdays Artwalk in San Pedro, while the Opening Reception will be on Saturday, October 5 from 3-6 p.m. The gallery is located at 479 West Sixth St., Suite 108 which is in the Historic Arts District of the City of San Pedro. There will be a closing reception on Saturday, November 23 at 3-6 p.m.

This will be the artist’s last solo exhibition as a U.S.-based artist, as Silva will be opening his new art studio in Calamba, Laguna, Philippines by the end of next year. He has designed and created over 100 public artworks and a second life in the artist’s homeland will re-launch his original trajectory in painting, which was abruptly disrupted when his parents decided to relocate to the United States in 1989. He considers his 30 years in the U.S. as an accidental “artistic detour,” because Silva never changed his Philippine citizenship nor even considered being a dual citizen. He considers his three decades in this country as mission-driven to surface the Filipino story in the American cultural landscape.

The title of the show “Recuerdos” was culled from Chapter 8 of Jose Rizal’s Noli Me Tangere (1887) and takes its inspiration from a scene in the novel, which was an experience of seeing the world through an “inverted telescope” by the lead character Crisostomo Ibarra upon his return to the Philippines after being away for many years in Europe for his studies, and after being brought within sight of the botanical gardens of Intramuros: “…the ‘spectre of comparisons’ placed him before the botanical gardens of Europe…Ibarra removed his gaze, looked right, and there he saw old Manila, still surrounded by its walls and moats, like an anemic young woman in a dress from her grandmother’s best of times.”

Silva is a contemporary artist born in Manila, Philippines and graduated with full honors at the Philippine High School for the Arts. He immigrated to the United States at 17 and obtained a BFA at Otis College of Art and Design with a Getty Multicultural Arts Internship Grant. He received his MFA at the Maryland Institute College of Art and was recognized with a Joan Mitchell Foundation MFA Grant Program Award.

The curator of the exhibition, Edwin Ramoran is an independent curator based in Palm Springs, California where he is a co-founder of Bayanihan Desert. He is a recipient of The Andy Warhol Foundation for the Visual Arts’ Curatorial Fellowship. He received a BA in Art History with minors in Ethnic Studies and Journalism from the University of California, Riverside and is an MA candidate in Art History at Hunter College of the City University of New York.

Ramoran was recently a director at Royale Projects in Los Angeles. He has held curatorial and managerial positions at cultural institutions in New York and New Jersey including Arkipelago, The Studio Museum in Harlem, The Bronx Museum of the Arts, Aljira, a Center for Contemporary Art, and Longwood Arts Project/Bronx Council on the Arts.

Since artist Silva is relocating to the Philippines by November 2020, “Recuerdos-Souvenirs” is his last solo exhibition as a U.S.-based artist. This exhibition will give viewers a chance to see his new works before he restores his original trajectory to create art as a Philippines-based painter, thus this new collection was called recuerdos (souvenirs).  When Pinta*Dos Art Gallery opened its doors in June 2017, he was the inaugural artist and his works were on an extended exhibition for six months because of the interest it has generated.

Los Angeles launches ‘LA for All’ in Tagalog, other languages