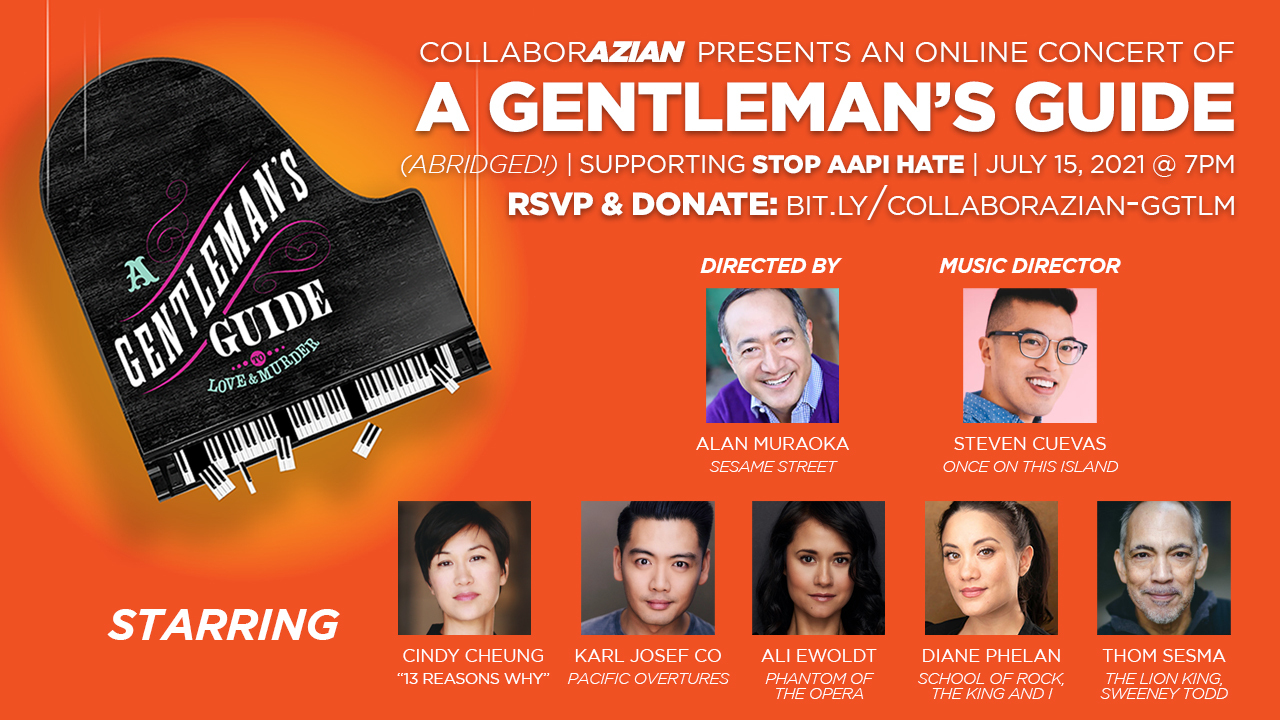 The virtual show will be streamed exclusively on Broadway On Demand and will benefit the Stop AAPI Hate initiative.

Tony Award Winner and Disney Legend Lea Salonga will make a special appearance as the host of CollaborAzian’s production of “A Gentleman’s Guide to Love and Murder” on July 15.

“Historically, Asian American artists have been marginalized in media and on stage… productions like this help to spotlight the tremendous talent that has been overlooked” said Salonga. “We’re here to show the world that we are here, and we are fantastic.”

CollaborAzian’s “A Gentleman’s Guide to Love and Murder” will be helmed by theatre and television director Alan Muraoka, who has played Alan, the owner of Hooper’s Store on “Sesame Street” for the past 23 years. He most recently played Iago in Disney’s Aladdin on Broadway, and starred as the Engineer in “Miss Saigon.” The all-Asian American cast will star Cindy Cheung (“13 Reasons Why”), Karl Josef Co (“Pacific Overtures”), Ali Ewoldt (“The Phantom of the Opera”), Diane Phelan (“School of Rock”), and Thom Sesma (“Sweeney Todd”). Steven Cuevas (“Once On This Island”) serves as music director.

“A Gentleman’s Guide to Love and Murder” won four Tony Awards at the 68th Tony Awards in 2014, including Best Musical.

“Broadway On Demand is committed to celebrating diversity and amplifying the voices of marginalized communities,” says Tralen Doler, Broadway On Demand Vice President of Programming and Partnerships. “It is an honor to partner with CollaborAzian in bringing this incredible production the attention it deserves.”

Along with the increased demand for Asian American and Pacific Islander (AAPI) representation in Hollywood, the AAPI Broadway and theatrical communities are also making their voices heard. Organizations such as the Coalition of Asian Pacifics in Entertainment (CAPE) Broadway Diversity Project, Unapologetically Asian, Leviathan Labs, Chinosity, and Tremendous Communications have also come together in support of the production.

The all-Asian American production of A Gentleman’s Guide to Love and Murder will take place on July 15th at 7 p.m. ET/4 p.m. PST. Donations for StopAAPIHate.org are now being accepted and tickets for the virtual show are now available.