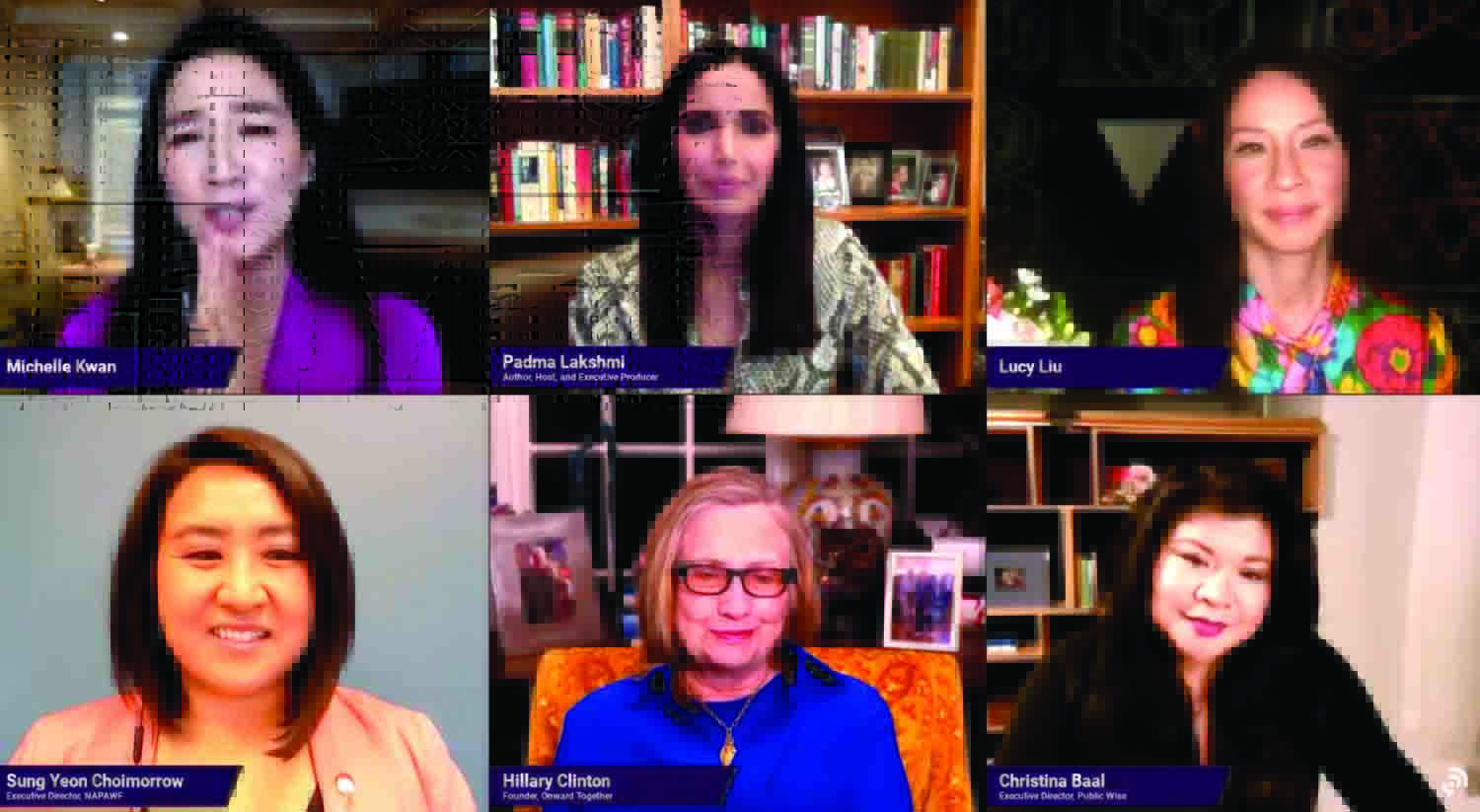 INFLUENTIAL celebrities banded together on Wednesday, April 21 for an evening of solidarity to support the Asian American and Pacific Islander community (AAPI) in fighting against anti-Asian hate and bigotry.

Through a virtual fundraiser hosted by Public Wise and Onward Together, proceeds of the efforts will be donated to support the National Asian Pacific Women’s Forum (NAPAWF), a leading national organization for AAPI women and girls in the U.S.

“This conversation is obviously coming to us out of heartbreak and anger and outrage because of the uptick in violence that we’ve seen in the AAPI community. And all of us know that what happened in Atlanta, what happened in Indianapolis, what’s been happening on our streets from literally New York to San Francisco is just incredibly frustrating. It should not be happening, and yet at the same time the fact that it is a big wake-up call,” Clinton said.

The former first lady and Secretary of State also cited the more than 3,800 incidents of harassment, discrimination, and assault against members of the community over this past year, with nearly 70% of all of those incidents targeting AAPI women.

“So, this is predominantly an issue about the overlapping racism, misogyny. And, you know bias and sadly hatred that some are expressing toward their fellow human beings, and I want to be clear about this for everybody who has tuned in, we all have a responsibility to listen to each other, learn from each other, take action, lift up people and groups who are leading the way,” Clinton added.

Clinton said that there are several things that allies and supporters of the AAPI community could do to help.

“Number one, support organizations like NAPAWF, support groups that are at the local level, community organizations that are really trying to give voice to the concerns of people who are often on the margins of society are not given the support and the attention that they deserve,” she said. “I think, secondly, we need to be including the very legitimate interests and worries of the AAPI community in all of our discussions. It’s not an afterthought, it’s integrated into the center of the discussion.”

In her many years in Hollywood, Lucy Liu has learned that aside from continuing to persevere and not giving up, it is of the utmost importance “to use your voice,” especially since it is not something “that we’re taught to do and this is not something that we are encouraged to do.”

Liu is the second Asian American woman with a star on the Hollywood Walk of Fame (the first recipient being Anna May Wong).

“It’s hard to share our feelings, you know, in that way when we’re not asked to do it through a script or when the cameras are rolling. It’s about the use of that platform using your voice, expressing yourself,” Liu explained. “I’m teaching that to my son now, you know to use his voice, and you communicate what it is that he needs.”

“The bottom line is that a closed mouth doesn’t get fed. So we really have to use our voice and sing as loud as we can,” Liu added.

Clinton also announced that Onward Together, the organization she founded in 2017, is supporting NAPAWF with a grant of $50,000 “to do the hard work of organizing and focusing and communicating publicly.” NAPAWF is the only national organization exclusively focused on building the political power of AAPI women and girls.

Television host, author and actress Padma Lakshmi lamented the labels used on her like “female host” and “Indian American author.”

Because of this, she started using a term which she hopes everyone gets to try in their daily lives, which is saying “European Americans” to refer to white Americans.

“Because that’s what they are, that’s what Caucasian people are so I think if I should say Indian American and you should say Chinese American or Filipino American or whatever your background is, I think we should just all start saying it for everybody: European Americans,” Lakshmi said. “It seems that that would be the great first step to making us equal in how we identify ourselves and each other.”

She also shared that there were times when she and her daughter (who self-identifies as white) would go to the neighborhood park and the other moms would look at her and ask if she’s the nanny.

Michelle Kwan shared her own story which happened after she represented the United States in the Olympics.

“I was actually shopping with my sister, and we were waiting in line and this young woman turned around like ‘I know you, where do I know you’ and I just had to let her think about it, and she finally turn around, she’s like, ‘I know! You did my nails,” she shared.

Lakshmi echoed Liu’s thoughts about speaking up together.

“I think it’s our responsibility to just be galvanized and I’m happy to see so many Asian Americans speak up because traditionally in many of our cultures, we were taught, you know not to stick out, not to stand out not to speak out. Keep your head down, work hard, be reserved and do everything you’re supposed to achieve whatever goals you have, and that’s great, but now is not the time to do that,” she said. “Now is the time I really believe to flex our voice and to use our voice and our platforms to really say, ‘Hey, we’re here.’”

“For the allies that are here with us tonight, you need to remember how you feel right now, and how you felt when you heard government officials say that someone shot eight people because they were having a bad day, and you need to remember that and you need to vote against those people and vote for people who stand up for communities that you believe in and support,” said Christina Baal-Owens, executive director of Public Wise. n