AS advocacy-oriented organizations of community, faith-based, and nonprofit leaders working collectively to empower underserved communities, the National Asian American Coalition and the National Diversity Coalition have been intensely focused on providing support to those in need during the pandemic. Hopeful that the worst is behind us, we are now looking to the future. Yet, alarmingly, another crisis is looming for California that has the potential to disproportionately harm Asian and Latino communities. It’s called Proposition 12.

Passed by voters in 2018 and set to go into effect in January 2022, Proposition 12 established new regulations on animal housing  for pigs, calves and egg-laying hens. Part of the new law included a directive for the California Department of Food and Agriculture (CDFA) to issue guidelines – by Sept. 1, 2019 – on how our state and the national food supply chain would comply with Proposition 12. It’s now more than a year and a half later and we’re still waiting.

Now, we’re faced with a frightening scenario: Come January 2022, most of the nation’s pork supply (bacon, ham and pork chops) will be illegal for sale in the Golden State, resulting in potential pork shortages and skyrocketing price increases. While concerning for all communities, this scenario is even more threatening for  Latino and Asian grocers, restaurants and families – communities that rely on pork as a main staple for a variety of meals.

Market experts are already anticipating a crisis. In fact, a recent independent analysis conducted by Rabobank, the global leader in marketplace analysis and research for the food sector, said:  “With less than 4% of U.S. sow housing currently able to meet the new standard, Rabobank expects a shortfall in compliant pork to bifurcate the U.S. market, leaving California with a severe pork deficit (and higher prices), while generating a surplus in the rest of the U.S. market.”

The Rabobank report adds, “Based on California’s current population, which over-indexes for pork consumption given its large Latino and Asian populations, Rabobank estimates the state would need at least 255 million pounds of compliant pork per month to satisfy its retail and foodservice needs. As only 1.9% of U.S. pork is produced in California, or 45 million pounds per month, we expect the state to need to import at least 210 million pounds of compliant pork per month from outside the state….Based on current production and projects underway, Rabobank estimates that compliant pork supplies could fall 50% short of Californian’s needs if the law were to be implemented on Jan. 1, 2022.”

When is enough, enough? As underserved communities struggle to recover and regain what was lost from the pandemic, a potential pork shortage is simply more than we can handle right now.

That’s why we’re asking Gov. Newsom to intervene and provide some much-needed assistance. The National Asian American Coalition and National Diversity Coalition recently joined the Food Equity Alliance – a statewide coalition of California grocery stores and restaurants, business organizations, food processors, pork producers, food equity supporters and consumers. We need Gov. Newsom to use his executive authority to delay the implementation of Proposition 12 – allowing the food supply chain a reasonable amount of time to comply with state regulations once released by the CDFA.

It’s not the consumers’ fault that state regulators have failed to properly implement Proposition 12 and they shouldn’t be forced to pay the price, nor should food providers. The idea of being unable to prepare our favorite pork dish or purchase bacon, ham or pork chops from a local grocery store is frightening, but something that could become our reality. We need Governor Newsom to act before it’s too late.

Faith Bautista is the President and Chief Executive Officer of National Asian American Coalition – a program-oriented nonprofit that provides housing counseling, small business lending, and technical assistance services to minority and low- income populations. She is also CEO of the National Diversity Coalition, working to strengthen America and all its diverse communities through advocacy, collaboration, and economic empowerment. 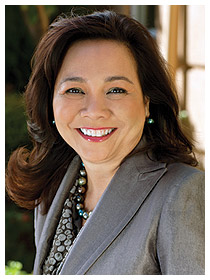 Beyond a hashtag: AAPI women, allies urge community to speak up