THE Larry Itliong Resource Center has finally made its grand opening in California’s Central Valley.

“We Are A Living Legacy” was the theme for the event held Sunday, October 24, to celebrate the inauguration of the Larry Itliong Resource Center, in Poplar, California, as well as commemorate the birthday of recent California Hall of Fame inductee and Filipino American labor hero Larry Itliong.

The event was sponsored by the Filipino American National Historical Society (FANHS) Delano, the Bulosan Center of Filipino Studies, and the Central Valley Empowerment Alliance (CVEA).

Also present in the event was Dolores Huerta, who co-founded the National Farmworkers Association with Chávez, which later merged with the Agricultural Workers Organizing Committee to become the United Farm Workers. She was joined by state Attorney General Rob Bonta and State Treasurer Fiona Ma.

“We remember the heroes who led especially our early farm workers who came here alone often and fought and toiled and fought for change,” said Bonta. “And also so we inspire our next generation to make sure they know people that look like them from their communities fought and made change to this great state and in this nation.”

The event included a historical tour of the region and  a solidarity march and rally from Agbayani Village to Reuther Hall in 40 Acres. 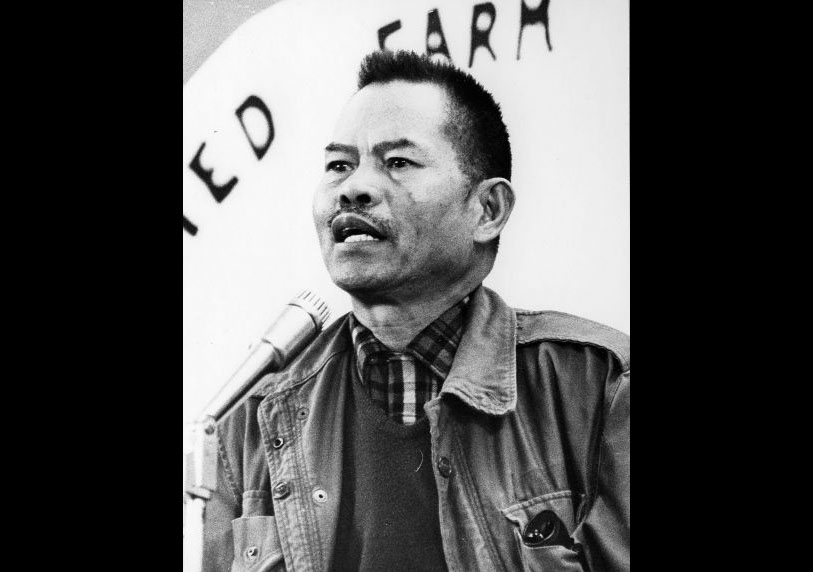 Itliong was one of the most important civil rights leaders of the 20th century and a father of the West Coast labor movement.

He was born in the Philippines and migrated to the United States in 1929, working in the Alaskan fish canneries and along the West Coast as a farm laborer.

Among Itliong’s achievements include uniting with the National Farm Workers Association (NFWA) and starting the Delano Grape Strike and Boycott, which is one of the most important social justice and labor movements in American history.

He also formed the UFW with Chávez, with the latter as director and the former as assistant director.

On Oct. 12, Itliong was among the six notable individuals posthumously inducted into the California Hall of Fame.

“This month, I had the honor of inducting Mr. Itliong into the California Hall of Fame, recognizing his incredible impact on our state and unapologetic advocacy for those without a voice,” added Newsom. (Ritchel Mendiola/AJPress)