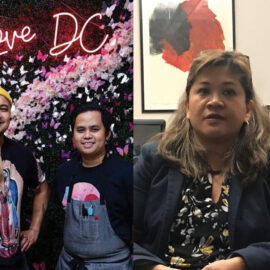 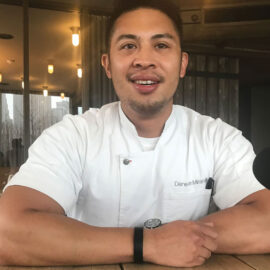 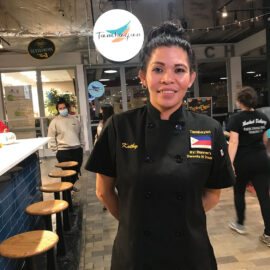 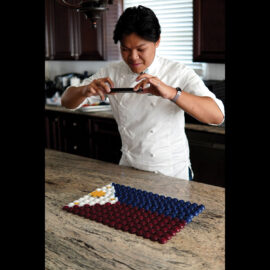 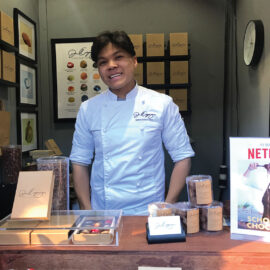 Laya DeLeon Hayes was born in Charlotte, NC and raised in Grand Prairie, Texas. As a young girl, she participated in school plays and talent shows, which powered her passion to perform. Photo by Alex Kruk; Chefs Tom Cunanan and Paolo Dungca, both former chefs at Bad Saint, are reunited at Pogiboy, the new Filipino fast-casual spot in Washington, DC. Contributed photo; Rose Cuison-Villazor broke the proverbial glass ceiling when she took her post as Co-Dean of Rutgers Law School. AJPress Photos by Momar G. Visaya ; Kevin Nadal is the first Asian American faculty member at John Jay College to be named Distinguished Professor. 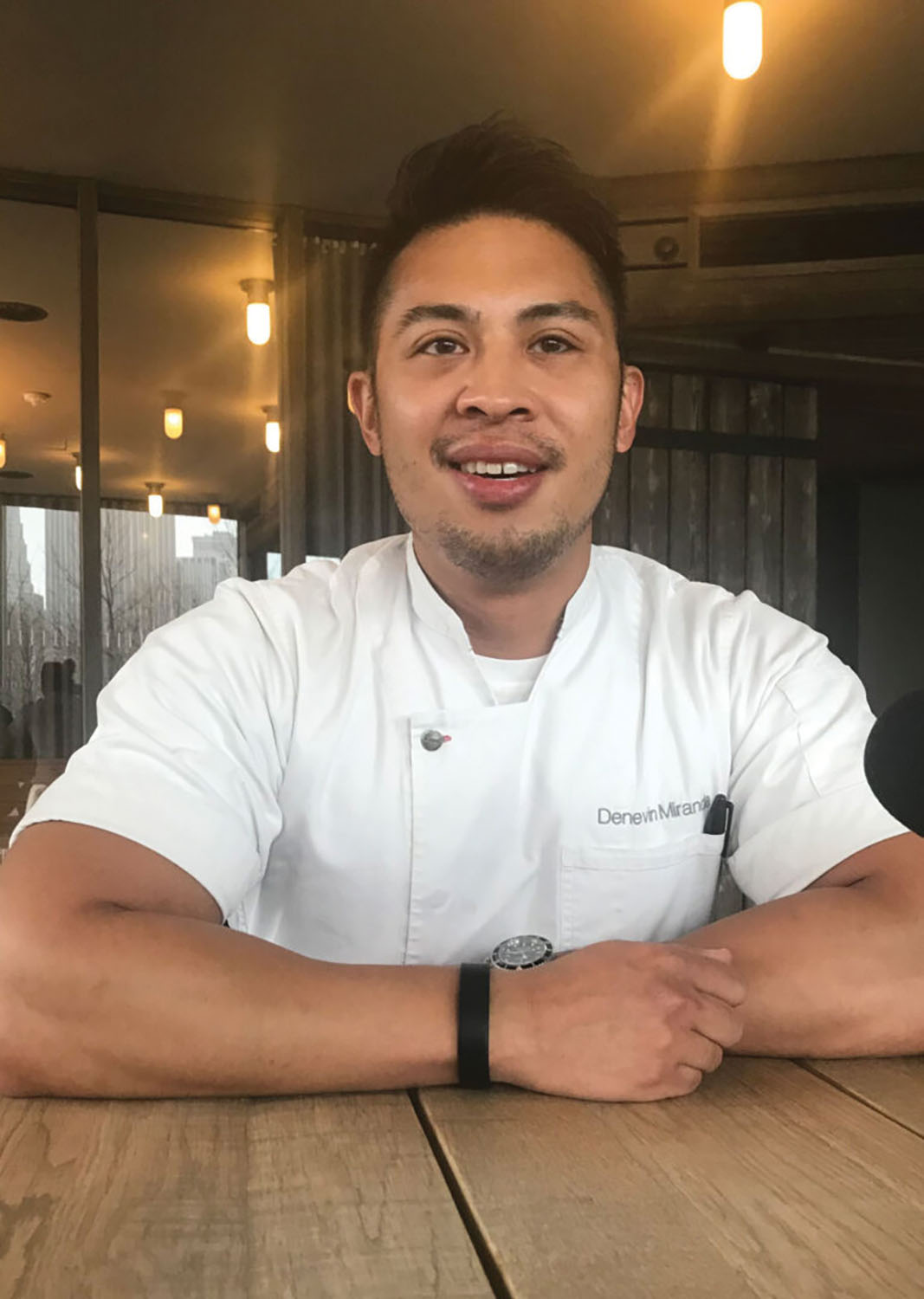 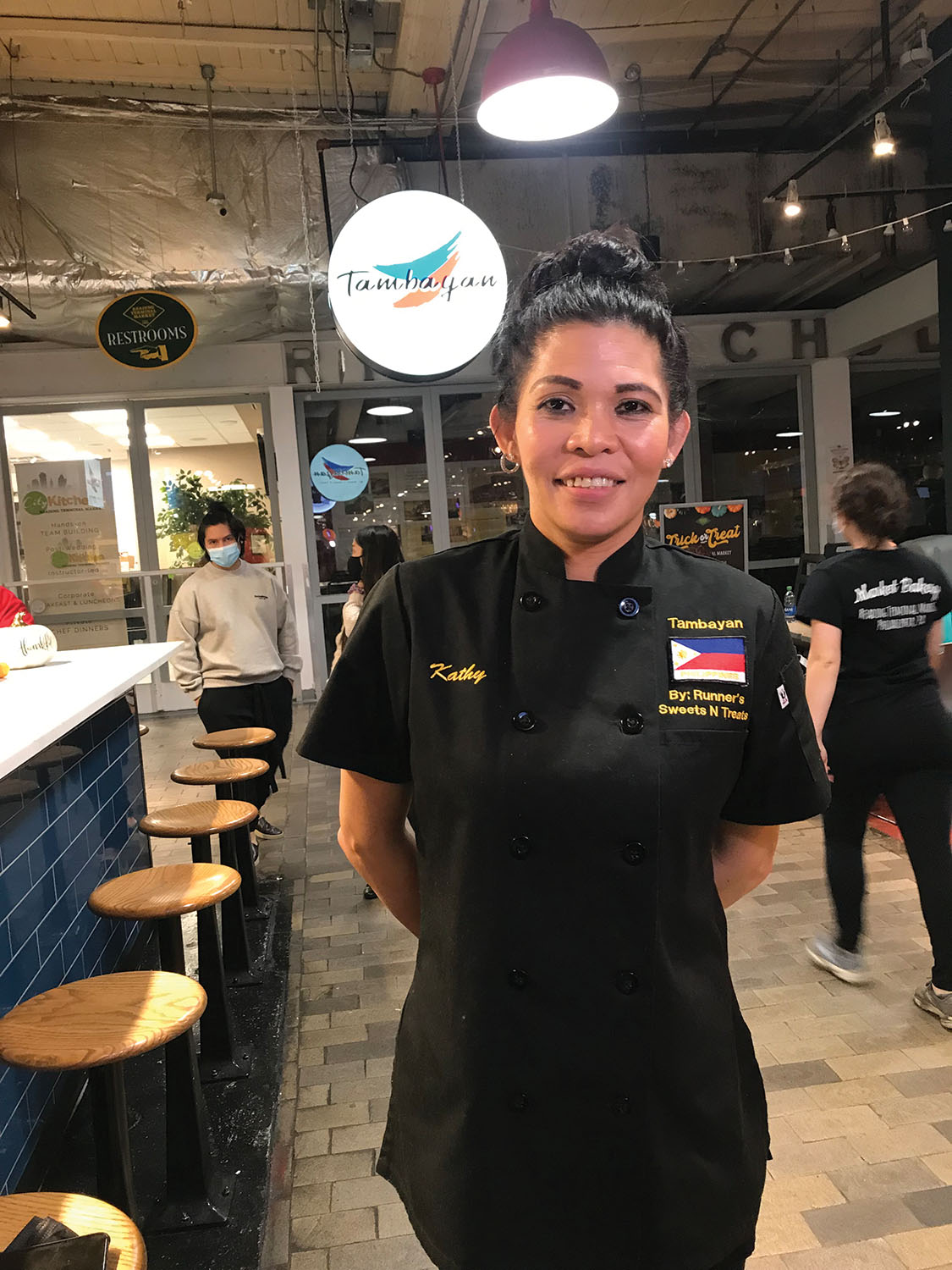 Chef and owner Kathy Mirano said it is all about hard work as she recalled the days when she worked as a house cleaner, dishwasher and caregiver. Two decades later and she is the woman behind Tambayan, which she hopes becomes a place for friends and family to hangout and eat good food. 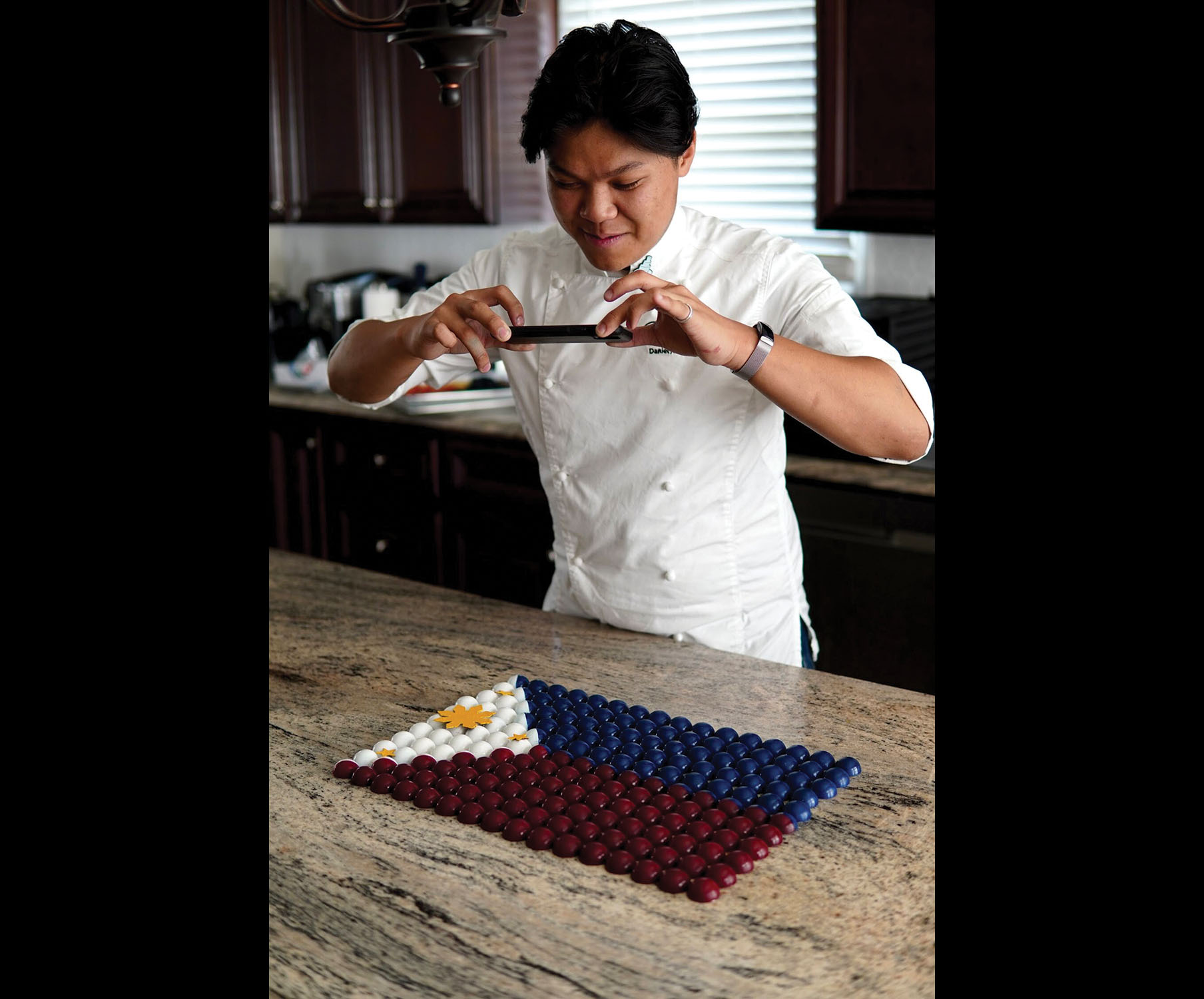 Being the only Filipino American on the show gave Corpuz a chance to represent his culture, something that he did on the first episode. On his social media account, he shows his creations including these bonbons that showcased the colors of the Philippine flag. Photo courtesy of @danielcorpuzchocolatier 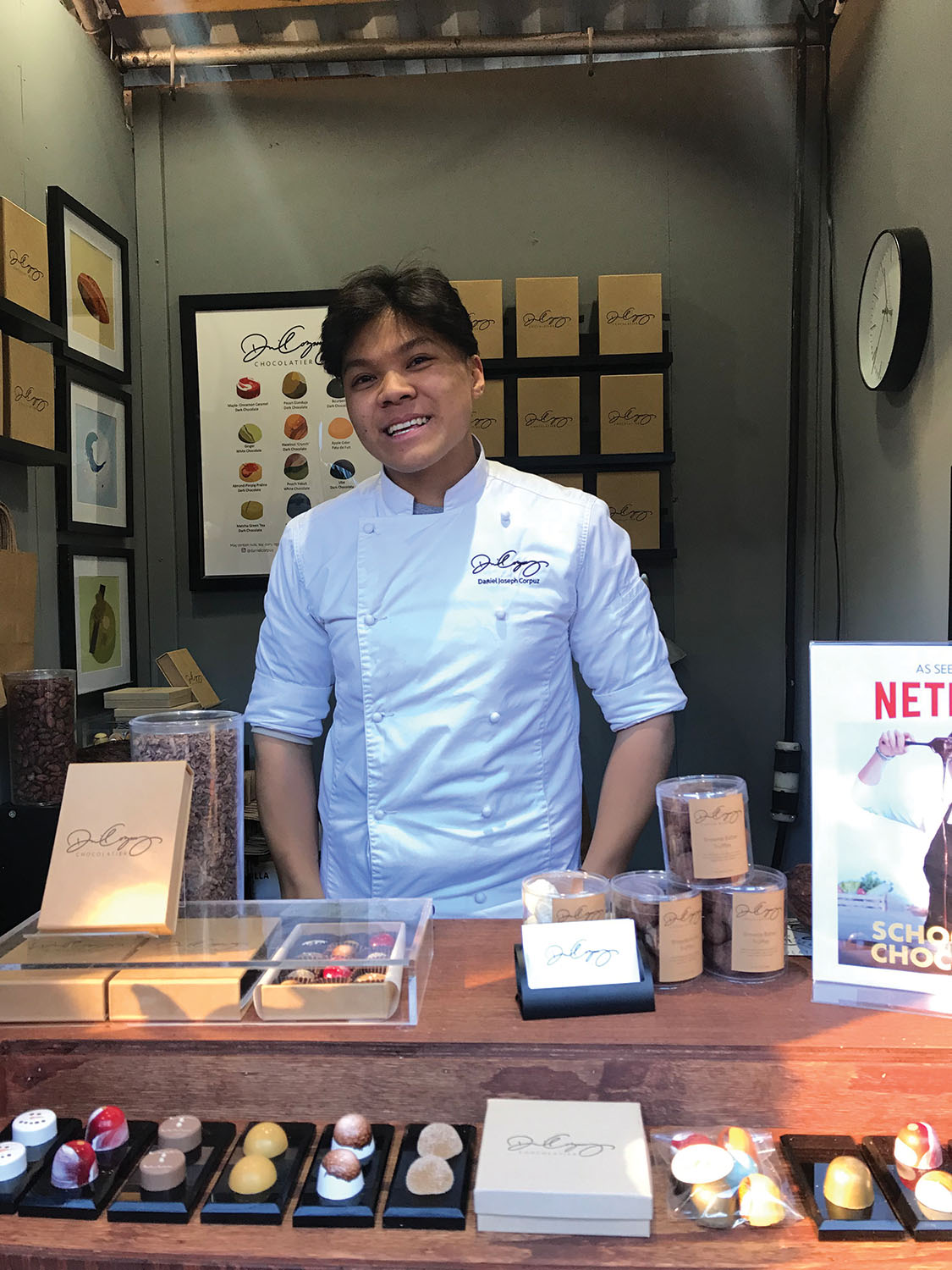 Daniel had only one choice of school and it was the Culinary Institute of America. “It gave me that foundation to make what I make now, but it has also given me a platform and network since so many people in the food industry come from CIA. So like even if I don’t know them or haven’t met them, if I just say CIA, most people already have an idea of what you can produce, who you are and what your work ethic is.,” he told the Asian Journal.

And just like that, we’re in 2022 and we’re still in the middle of the ongoing COVID-19 pandemic.

For the past couple of years, we saw a surge in small businesses that began during the lockdown. We also saw a rise in the cases of hate and violence against Asian Americans across the country and how the community banded together to denounce these crimes.

Filipino Americans welcomed Joseph Biden as the new president of the United States. and across the diaspora, celebrated Hidilyn Diaz who won the first-ever Olympic gold for the Philippines.

Following tradition, the Asian Journal editorial team dedicates the first issue of the year reflecting on the LifEASTyle stories from 2021. Each week, the LifEASTyle features long-form stories of Filipino American personalities, organizations, and businesses that continue to break barriers in their respective industries, as well as highlighting the Fil-Am experience living in America and the various social issues the community faces.

The 52 features published have covered ways families have celebrated major holidays while staying safely at home, how business owners in the tri-state have coped with the ever-changing restrictions related to the pandemic, and the summer of protests for racial justice, new books by Fil-Am authors, and more.

It’s always difficult to narrow down the best features — as each one is compelling — we remember several stories that have been widely shared and discussed. To read these selected features & other stories in their entirety, visit: https://asianjournal.com/category/magazines/life-eastyle-magazine/

Last year, we featured a host of personalities, ranging from authors with current and upcoming books and actors who are on stage, television, or film.

Perhaps the biggest splash was made by breakout star and teen sensation Olivia Rodrigo. Her debut single Drivers License broke the Spotify record for most streams of a song in a single week as it was streamed 65,873,080 times during the week ending on Jan. 14, according to Spotify’s global weekly Top 200 chart.

On the TV front, Laya De Leon Hayes plays the role of Queen Latifah’s daughter in CBS’ The Equalizer, which the young star considers as her biggest project to date.

“Considering how popular of a franchise The Equalizer is and how Queen Latifah is creating history by being the first female Equalizer really made me excited and honored to be a part of this amazing cast,” Laya told the Asian Journal, describing the eagerness she felt about the project.

The Disney+ series “Big Shot” starring Hollywood veteran John Stamos introduced us to Tisha Custodio who immigrated to the United States at three years old, settling in California with her family. She discovered acting at a young age and enrolled in the Orange County School of the Performing Arts followed by multiple summers at Shakespeare Orange County School where she studied alongside seasoned actors and also joined the CalArts intensive acting program.

Then there’s Daniel Corpuz, from the Netflix show School of Chocolate. Like many others in the food and hospitality industry, Corpuz lost his job as the global pandemic began to wreak havoc last year.

“Inisip ko kung ano ang puwede kong gawin, I can’t do nothing here at home,” the chocolatier and pastry chef told the Asian Journal. Corpuz played a lot with chocolate to further hone and practice his knowledge and he posted his stuff on social media. Because of his business and chocolate background, he toyed with the idea of selling his chocolate creations, and thus began his chocolate brand.

Then Netflix found him. They liked his story and they decided to have him on the show called ‘School of Chocolate’. Corpuz described this experience as amazing, one that truly made him realize what he wanted to do in life.

Corpuz was not the only Pinoy chef on reality TV last year.

Denevin Miranda was declared the champion of the Food Network show Chopped with its new season focused on “Meat Fight,” a glorious, carnivorous throwdown for gastronomy lovers.

Chef Denevin is Chef de Cuisine at 1 Hotel Brooklyn Bridge in New York City and classically French-trained with a lot of his flavors rooted in Filipino-style cuisine.

In the show, he served sisig using the crisped-up pork butt and spare ribs along with Brussels sprouts and apple salad on the side to complement the unctuousness of the sisig. The dish ended up winning the judges’ praises and called it the best dish in the competition.

Denevin was confident from the get-go, as he went into the competition to win it and if he could, promote Filipino cuisine as well. He also said he wanted to make his parents proud, especially his father who has passed away.

“I knew going in there that I wanted to do something Filipino and show something to the judges. And sisig is one of my favorite dishes,” he told the Asian Journal. “Actually, my grandma never cooked it. I was introduced to that when I went to the Philippines. And you know, it’s a dramatic dish, because it comes out sizzling. Yeah, and it’s like, you know, it’s like you can’t stop eating.”

PogiBoy, the newest Filipino hotspot in the nation’s capital and the reunion project of two trailblazing Filipino American chefs, was born as an homage to the fast-food chains they enjoyed as kids. The men behind the concept are James Beard awardee Tom Cunanan, who made waves in the DC hospitality industry as one of the founders of Bad Saint, and former Kaliwa chef Paolo Dungca. It’s a reunion of sorts since Dungca worked as a sous chef at Bad Saint back in 2015.

“We’ve always wanted to open a Filipino fast-casual and we finally made it happen,” Cunanan told the Asian Journal. “We’re just so proud of ourselves for representing our flag and we’re just so happy to cook Filipino food again.”

The pandemic upended many businesses across the board and among the most affected was the food and beverage industry. For some chefs like Tom and Paolo, it was the perfect time to pivot.

Several courageous entrepreneurs in Jersey City stepped up and opened their business in the middle of the pandemic, like the husband and wife team of Alex and Ethel Quintos who opened Fi’Co along Mallory Avenue; Jordan Andino with an outpost of his Flip Sigi near Journal Square; Baonanas in a couple of locations and So Sarap NYC joining the Smorgasburg family in downtown.

Jollibee opened its second store in Jersey City, located near the Hudson Mall on Route 440. This branch is Jollibee’s 69th store in the United States and there are plans to open a few more in the area, including the American Dream, Jamaica in Queens, and the flagship in Times Square.

Philadelphia’s Reading Terminal Market is one of America’s largest and oldest public markets. It began operation in a National Historic Landmark building back in 1893 and has become one of the city’s most popular tourist destinations along with the Liberty Bell and Independence Hall.

Last July, after 128 years in existence, the market opened its doors and welcomed Tambayan, its first Filipino concept restaurant.

Kathy Mirano, the founder and chef of Tambayan and Runner’s Sweets and Treats, felt that it was about time that a Filipino establishment opened in the market, where more than a hundred thousand Philadelphians and tourists pass through every week enjoying its exceptional products, history, and people.

“Dumaan po tayo sa butas ng karayom, pagod at hirap. Pinaglaban ko po talaga,” Mirano told the Asian Journal about her journey in getting a spot to showcase Filipino food and culture in the city of brotherly love.

We featured a couple of Filipino Americans in the academe who both made history and broke barriers.

“I’m proud, and I’m grateful for this, for the chance to lead, and I would not be where I am today without the help of many other mentors and friends who supported me along the way,” Villazor told the Asian Journal. “I’m extremely grateful to be in this position and excited to continue leading despite the challenges of the pandemic. This is a position that I hold dear to my heart, and I look forward to continuing to do.”

A nationally-regarded legal scholar with an active record in social justice issues and the areas of immigration, citizenship, property law, and race and the law, Villazor has published in top legal journals including the California Law Review, Columbia Law Review, Michigan Law Review, and NYU Law Review, among others.

John Jay College of Criminal Justice Professor Kevin Nadal is known in the Filipino American community as an educator, psychology expert, community organizer, historian, and supporter of the arts, among many other things.

The City University of New York recently named Dr. Nadal to the title of Distinguished Professor in recognition of his exceptional contributions to scholarship and the public discourse, becoming the first Asian American faculty member at John Jay College to hold the title.

Nadal started at CUNY in 2004 at LaGuardia Community College where he was an instructor teaching education classes. Two years later, he started as an adjunct at John Jay College, and then he became a full-time faculty member in 2008 in the psychology department.

He is now the tenth current Distinguished Professor at John Jay, the second person of color and the youngest to be afforded the distinction.

Pechanga Resort Casino Wishes Everyone a Prosperous Year of the Tiger!