If one of your New Year’s resolutions is to read more, the Asian Journal recommends books by several Fil-Am authors to add to your own list.

In the past year, books on our radar have included Jose Antonio Vargas’ memoir “Dear America: Notes of an Undocumented Citizen,” fiction novel “Aliasing” by Mara Coson, graphic novel “Blame This on The Boogie” by Rina Ayuyang, and poetry collection “ESL or You Weren’t Here” by Aldrin Valdez.

There are a handful of books we’re excited about this year, such as “Lalani of the Distant Sea” (May 2019), an epic fantasy inspired by Filipino folklore by 2018 Newbery Medal Winner Erin Entrada Kelly and “Trick Mirror: Reflections on Self Delusion” (August 2019), a book of essays on contemporary digital culture by New Yorker staff writer Jia Tolentino.

Email us at [email protected] to share your reading list and other books by Filipino and Fil-Am authors from 2018 as well as those to watch in 2019. 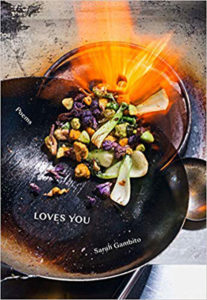 “Loves You” by Sarah Gambito

“Loves You” — which will be released on January 22 by Persea Books — is a collection of recipes in poetic form and a mode of resistance. Author Sarah Gambito includes real recipes she and her family cook to bring readers on her table not only to enjoy the bounty of her poems but, slyly to consider the ways in which Filipino-Americans, and people of color in general, are assailed and fetishized.  The book also explores ways for poetry to  nourish the reader’s soul and mind through Gambito’s playful style and zest in her words.

Gambito is the author of the poetry collections “Delivered” (Persea, 2009) and “Matadora” (Alice James, 2004). She has received honors for her work from Barnes & Noble’s Writers for Writers Award from Poets and Writers, and the Wai Look Award for Outstanding Service to the Arts from the Asian American Arts Alliance.  She is also an Associate Professor of English and Director of Creative Writing at Fordham University, and co-founder of Kundiman, a non-profit organization serving Asian American writers. Pre-order available on Amazon.

“Insurrecto” is the fourth novel by Gina Apostol, who has previously won a PEN/Open Book Award and a Philippine National Book Award. “Insurrecto” follows two women — Filipina translator Magsalin and American filmmaker Chiara Brasi — on a trip in present-day Philippines (under Duterte) to work on a script about the Balangiga massacre during the Philippine-American War.  Magsalin and Chiara end up writing and clashing on two different scripts, one from the perspective of a Filipino schoolteacher and the other from the lens of a white photographer.

“I’m very interested in that concept of multiple ways of looking at things,” Apostol told NPR. “You know, this notion that in all of us there are multiple identities, you know, and we don’t recognize the simultaneity of them. I’m a mom, I’m a daughter, I’m a teacher, I’m a writer, I’m a Filipino, I’m an American. And I really like this kind of seeing things from various points of view.”

“This is a complex and aptly vertiginous novel that deconstructs how humans tell stories and decide which versions of events are remembered; names repeat between scripts, and directors suddenly interrupt what feels like historical narration. Apostol’s layers of narrative, pop culture references, and blurring of history and fiction make for a profound and unforgettable journey into the past and present of the Philippines,” Publishers Weekly wrote in its review. 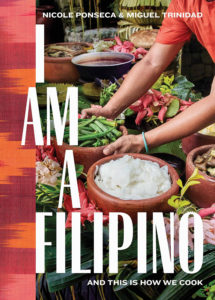 Trailblazing restaurateurs Nicole Ponseca and Miguel Trinidad’s latest collaboration, a cookbook titled “I Am a Filipino (And This is How We Cook),” has made it to the Best of 2018 lists of many reviewers. From The New Yorker, Boston Globe, Chicago Tribune, Los Angeles Times, New York Times Book Review, Houston Chronicle, Food52, PopSugar, they are one in saying that.

Ponseca and Trinidad made sure that the whole spectrum of Filipino cuisine is somehow represented in this book, from the simple to the most complex recipes and from casual, street food to the classic national dishes like adobo, kare kare and kinilaw to regional dishes.

At their San Francisco launch, Trinidad shared that one of the biggest challenges they had to face was sourcing for the right ingredients, particularly those that are really hard to find here in the United States.

“We had to find alternatives, and we mentioned that in the book. Filipinos are very resourceful,” he said. Ponseca made a shout out and thanked people like Clang Garcia, Ige Ramos and Cocoy Ventura in the Philippines for showing them around the regions to discover recipes and ingredients that are specific to the provinces and towns they visited. 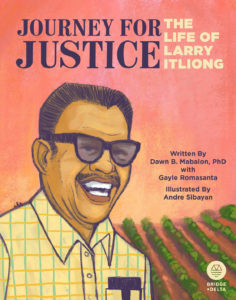 “Journey for Justice: The Life of Larry Itliong” by Dawn Mabalon and Gayle Romasanta

The late historian Dawn Bohulano Mabalon, writer Gayle Romasanta and illustrator Andre Sibayan collaborated on “Journey for Justice: The Life of Larry Itliong,” released in October 2018 by Bridge + Delta Publishing.  “Journey for Justice” — the first nonfiction illustrated children’s book on Fil-Am history — details Itliong’s efforts as a farm labor organizer and civil rights activist who led the Delano Grape Strike in 1965 and eventually co-founded the United Farm Workers with Cesar Chavez. Though efforts in recent years have been made to highlight Itliong and fellow Filipino labor leaders’ roles in one of the most pivotal social movements in U.S. history, this is the first-ever book on Itliong.

A percentage of proceeds from this book will be donated to the nonprofit organizations, Little Manila Rising and the Filipino American National Historical Society.

Itliong’s story will be the first of a series of eight children’s books on Fil-Am history under Romasanta’s Bridge + Delta Publishing, under the authors’ mission that Fil-Am stories should be part of K-12 education.

*The first edition of the book will be launched and sold in Los Angeles on Sunday, January 27, while the second edition will be available online in late March. 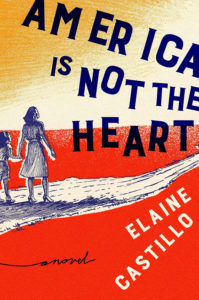 “America is Not the Heart” by Elaine Castillo

Elaine Castillo grew up in what she describes as a “very Filipino neighborhood in a very Filipino atmosphere.” Her town, Milpitas in California is a majority-minority where there’s a large Filipino, Vietnamese, Mexican, Taiwanese communities, which is why she said she didn’t grow up thinking of herself as a minority.

“I read quite a lot of translated works, which I realize now probably is a sub-conscious political response to a white mainstream canon. I read a lot of Filipino American writers from Jessica Hagedorn to Carlos Bulosan. That book, ‘America is in the Heart,’ was the first time I ever read about someone from Pangasinan,” she told the Asian Journal.

Asked if her novel is her response to Bulosan’s classic masterpiece, she replied, “To be honest, I didn’t actually think of the title as the grand, ambitious answer to Bulosan.”

“As a Filipino, I like a pun. So whenever I read the title ‘America is in the Heart’ from Bulosan, I always thought, ‘America isn’t the Heart,’ just as a rhyming joke that I used to say to myself. It was never a big thing. It came from that private, personal joke,” she said.

‘I Am a Filipino’ among James Beard Foundation Book Award finalists

6 Filipino-authored cookbooks to add to your shelf